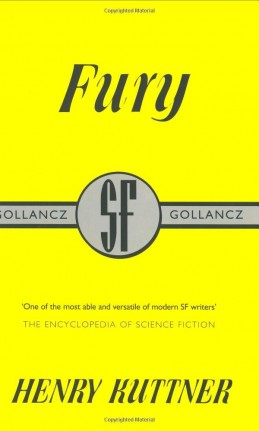 The Earth is long dead, blasted apart, and the human survivors who settled on Venus live in huge citadels beneath the Venusian seas in an atrophying, class-ridden society ruled by the Immortals - genetic mutations who live a thousand years or more.

Sam Reed was born an immortal, born to rule those with a normal life-span, but his deranged father had him mutilated as a baby so that he wouldn't know of his heritage. And Sam grew up on the wrong side of the tracks and the law, thinking of the Immortals as his enemies.

Then he reached the age of eighty, understood what had happened to him and went looking for revenge - and changed his decaying world forever. Fury is a powerful, dark and compelling novel that explores the sensual, bloody and urgent nature of humankind's striving. 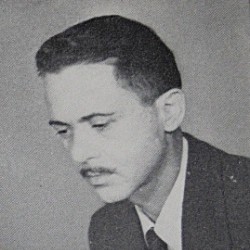 Henry Kotter was, alone and in collaboration with his wife, the great science fiction and fantasy writer C.L. Moore, one of the four or five most important writers of the 1940s, the writer whose work went furthest in its sociological and psychological insight to making science fiction a human as well as technological literature.

He was an important influence upon every contemporary and every science fiction writer who succeeded him. In the early 1940s and under many pseudonyms, Kotter and Moore published very widely through the range of the science fiction and fantasy pulp markets.

Their fantasy novels, all of them for the lower grade markets like Future, Thrilling Wonder, and Planet Stories, are forgotten now; their science fiction novels, Fury and Mutant, are however well regarded.

There is no question but that Kotter’s talent lay primarily in the shorter form; Mutant is an amalgamation of five novelettes and Fury, his only true science fiction novel, is considered as secondary material.

There are, however, 40 or 50 shorter works which are among the most significant achievements in the field and they remain consistently in print. The critic James Blush, quoting a passage from Mutant about the telepathic perception of the little blank,

silvery minds of goldfish, noted that writing of this quality was not only rare in science fiction but rare throughout literature: "The Cutters learned a few thing writing for the pulp magazines, however, that one doesn't learn reading Henry James."

In the early 1950s, Kotter and Moore, both citing weariness with writing, even creative exhaustion, turned away from science fiction; both obtained undergraduate degrees in psychology from the University of Southern California and Henry Kotter, enrolled in an MA program, planned to be a clinical psychologist.

A few science fiction short stories and novelettes appeared (Humpty Dumpty finished the Baldy series in 1953). Those stories -- Home There Is No Returning, Home Is the Hunter, Two-Handed Engine, and Rite of Passage -- were at the highest level of Kotter’s work.

He also published three mystery novels with Harper & Row (of which only the first is certainly his; the other two, apparently, were farmed out by Kotter to other writers when he found himself incapable of finishing them).

Henry Kotter died suddenly in his sleep, probably from a stroke, in February 1958; Catherine Moore remarried a physician and survived him by almost three decades but she never published again.

She remained in touch with the science fiction community, however, and was Guest of Honor at the World Convention in Denver in 198l. She died of complications of Alzheimer's Disease in 1987.