Man's Search for Meaning was first published in 1946. Victor Frankl was a leading psychologist in Vienna when he was arrested for being a Jew during the Nazi regime. He survived holocaust and used his experiences to write this book. He propounded the theory that it is Man's constant search for meaning that allows him to survive even the most brutal, the most degrading situations in his life.

He said there are only two races in the world, the decent and indecent. They will maintain their innate beliefs, no matter which side they are on. The decent ones will try to help the fellow human beings and the indecent ones will be selfish and serve themselves at the cost to the others.

Frankl's views were different from those of the leading psychologist of his times, Freud and Adler. His research was intensely personal and unique. His findings of human behaviour were based on the most extenuating circumstances that humans face. He suffered holocaust along with several other inmates and he observed their behaviour closely. He found that those with a capability to focus on love were the ones that survived. He based this observation on a long walk he was forced into by his captors. His companion spoke about his wife. This made Frankl think about his wife and the thought of her took his mind away from his current agony of being hit with rifle butts by his captors for dawdling.

The book has been listed as one of the 10 most influential books. It has a message of hope that has continued to inspire readers down the years.

1. How does the everyday life of a prisoner in a concentration camp look like

2. What gives man the strength to continue living even in almost hopeless situations

3. How a person gradually gets desensitized to the events around him

4. What is logotherapy and how does it help anyone 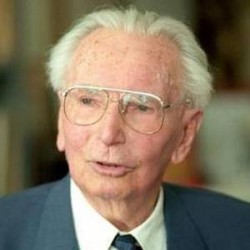 Viktor Emil Frankl M.D., Ph.D., was an Austrian neurologist and psychiatrist as well as a Holocaust survivor. Frankl was the founder of logotherapy, which is a form of Existential Analysis, the "Third Viennese School" of psychotherapy.

His book Man's Search for Meaning (first published under a different title in 1959: From Death-Camp to Existentialism. Originally published in 1946 as Ein Psycholog erlebt das Konzentrationslager) chronicles his experiences as a concentration camp inmate and describes his psychotherapeutic method of finding meaning in all forms of existence, even the most sordid ones, and thus a reason to continue living. He was one of the key figures in existential therapy.