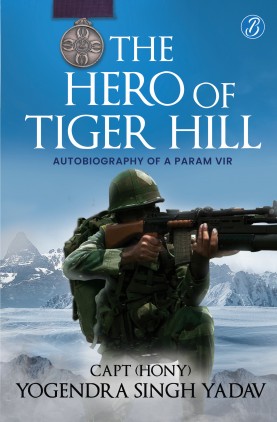 The Hero Of Tiger Hill

Autobiography of a Param Vir

I was not afraid of death. All I prayed for now was to not die before winning back Tiger Hill for India.
On the night of 3 July 1999, Grenadier Yogendra Singh Yadav, all of 19 years old, was given a very crucial task along with the Ghatak Platoon of 18 Grenadiers – to capture the impenetrable Tiger Hill. Fresh after capturing Tololing Hill, the Unit was high on josh, but also battered and bruised.

Braving the inhospitable terrain, freezing cold weather and facing fierce enemy fire, he was the first in this Ghatak Platoon to reach the top. Even after his body was pierced by multiple bullets and grenade shrapnel, he charged the enemy bunkers and cleared the path for the regiment to capture the mighty peaks of Tiger Hill.
He displayed the most conspicuous courage, indomitable gallantry, grit and determination under extreme adverse circumstances during the Kargil War which made him the youngest awardee of the highest Indian military award – the Param Vir Chakra.
The Hero of Tiger Hill is the true story of a brave soldier who leaves no stone unturned and fights valiantly for the honour of his country. In his own words, Captain (Hony) Yogendra Singh Yadav gives us an inspiring account of the Kargil War through his transformative journey of fulfilling his most cherished dream of serving the Indian Army.

Captain (Hony) Yogendra Singh Yadav (Retd) is the youngest Param Vir Chakra awardee in India. He was given the highest military honor of the country for his exemplary courage during the Kargil War. Having volunteered to make way for the Ghatak platoon in the tough terrain of Tiger Hill, Yadav continued crawling up in the midst of intense fire to silence the enemy position.

Coming from a small town in India, he joined the Army at the tender age of sixteen. His humble beginnings only paved the way for higher achievements with every single step he took.