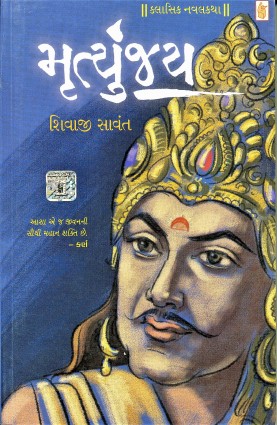 The search for the meaning of Being is man's eternal quest and the subject of his greatest creations. Shivaji Sawant's Mrityunjaya is an outstanding instance of such a literary masterpiece in which a contemporary Marathi novelist investigates the meaning of the bewildering skein that is life through the personae of the Mahabharata protagonists.

For over two decades since its first publication the vast non- Marathi and non-Hindi readership remained deprived of this remarkable exploration of the human psyche till the publication of this English translation by the Writers workshop – a contribution for which there is much to be grateful for. Mrityunjaya is the autobiography of Karna, and yet it is not just that. With deceptive case, Sawant brings into play an exceptional stylistic innovation by combining six "dramatic soliloquies" to form the nine books of this novel of epic dimensions.

Four books are spoken by Karna. These are interspersed with a book each from the lips of his unwed mother Kunti, Duryodhana (who considers Karna his mainstay), Shon (Shatruntapa, his foster-brother, who here-worships him), his wife Vrishali to whom he is like a god and, last of all, Krishna. Sawant depicts an uncanny similarity between Krishna and Karna and hints at a mystic link between them, investing his protagonist with a more-than-human aura to offset the un-heroic and even unmanly acts which mar this tremendously complex and utterly fascinating creating of Vyasa.

After extensive research he wrote a book Mrityunjay (English: Triumph Over Death) based on Karna, one of the leading characters of the epic Mahabharat. This book was translated in Hindi (1974), English (1989), Kannada (1990), Gujarati (1991), Malayalam (1995) and received numerous awards and accolades. In 1980 he wrote a book Chhava based on Sambhaji's life.