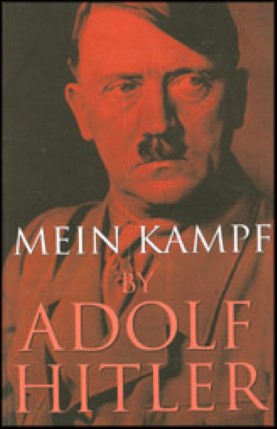 This book by the world’s most prominent and controversial dictator in political history of the last two hundred years is an autobiographical account of Adolf Hitler’s political strategy and his manifesto for Germany.

The first volume of the book was dictated by Hitler to his deputy Rudolf Hess while he was imprisoned for his “political crimes”. The first volume was scheduled for release in 1925 and was considered as Hitler’s means of completing his financial obligations and expenses for his trial. The second volume of the book was released when Hitler was free from prison and described his struggle towards realizing a historic destiny for Germany.

Through the book, the narrator describes his hatred of communism and Judaism, which for him are the world’s twin evils and his life’s journey towards becoming the anti-Semitic and militaristic person that the world knows him to be.

He announces his intentions of completely overtaking the parliament and his belief that the Marxists, Social democrats and the parliament were all secretly working for the Jews. Hitler’s genocidal theories surface from many passages in which he accepts that the elimination of the weak and sick will be far more humane than protecting them.

The book presents a vision of the Second World War that is unknown to the common world. Due to its racist content and Nazi ideology, the book has earned a reputation of its own. The author’s aggressive intent and militaristic comments make the book a controversial record of the political history of the World War. 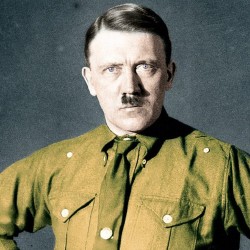 Adolf Hitler was an Austrian-born politician who led the National Socialist German Workers Party. He became Chancellor of Germany on January 30, 1933 and Führer in 1934, leading his country into World War II.

During the final days of the war in 1945, as Berlin was being invaded and destroyed by the Red Army, Hitler married Eva Braun. Less than 24 hours later, the two committed suicide in the Führerbunker.

Hitler's best known literary work is Mein Kampf , the political manifesto he dictated to a fellow inmate while in prison in 1924.