Home / Books / She Stoops to Kill: Stories of Crime and Passion 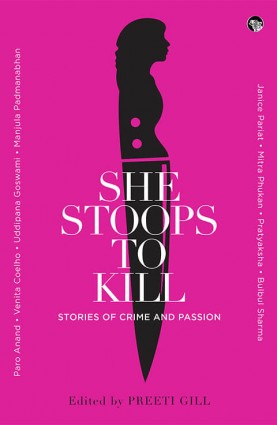 She Stoops to Kill: Stories of Crime and Passion

In Mitra Phukan’s story that opens this edge-of-the-seat anthology, She Stoops to Kill: Stories of Crime and Passion, a singing diva chokes to death onstage. The weapon is a poisoned paan—but who would want her dead? And Pratyaksha follows Mitra’s entrée with the murder of an equally glamorous victim—air hostess Ginny Kalra. Bulbul Sharma, in ‘Murder in the Wedding Season’, creates a cosy setting for a wedding in Shimla; but the guests include a politician and a timorous widow whose past will disrupt the party in ways no one had imagined. And in Uddipana Goswami’s ‘Beloved of Flowers’, a folktale about a girl reborn as a lotus leads young Dino to the truth behind a mysterious disappearance.

Manjula Padmanabhan’s ‘Serial Killer’ brilliantly explores what it is like to be a perfectly normal person—except that you enjoy the act of murder. While Janice Pariat’s delicately nuanced ‘The Nurse’ shows us another side of death altogether. In the penultimate story by Venita Coelho, Sister, a vigilante eunuch, helps the police solve a gruesome killing in a city slum. And Paro Anand brings the collection to a grand finale with a story that begins with lust and ends with a murder—or two—that may or may not have happened.

By turns chilling, horrific and morbidly fascinating, She Stoops to Kill: Stories of Crime and Passion, is a steaming witches’ cauldron of stories that will keep you riveted, page after page. 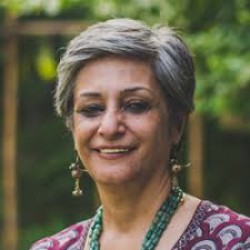 Preeti Gill is an independent editor and literary agent. As a commissioning editor and rights manager, she has more than twenty years of experience in the publishing industry.

In her new role as literary agent she represents more than thirty well-known, critically acclaimed writers of fiction and creative non-fiction.

Her books include an edited volume of essays, The Peripheral Centre: Voices from India’s Northeast; Bearing Witness:

A Report on the Impact of Conflict on Women in Nagaland and Assam (co-edited with Sanjoy Hazarika), and Shadow Lives: Widowhood in India (co-edited with Uma Chakravarty).

She has edited (along with Samrat) Insider/Outsider: Belonging and Unbelonging in Northeast India. She is now working on an anthology of non-fiction writings on Punjab.

She has worked on a number of documentaries as scriptwriter and researcher, including Rambha: Mizoram’s ‘Trouble’ Years which she has co-produced with Sanjoy Hazarika.

Preeti Gill is the founder of Majhi House, a literary and cultural center in the city of Amritsar.