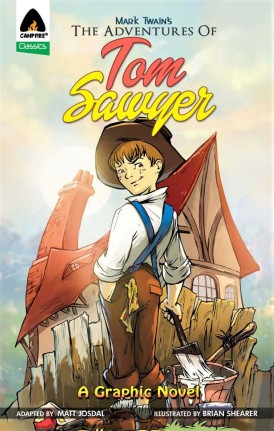 Tom Sawyer is a mischievous young boy with an undying hunger for adventure, and a knack for getting into trouble. He lives with his Aunt Polly in the Mississippi River town of St Petersburg, Missouri. He plays hooky from school; hangs around with Huck Finn, the unsophisticated son of the village drunkard; and deceives his friends into trading their treasures with him.

Tom falls in love with Becky Thatcher, a new arrival in town, who returns his affection initially, and even agrees to an 'engagement'. However, after a slip of the tongue from Tom, she walks off in a huff.

From innocent and imaginary adventures, Tom's life suddenly takes a new turn. One night, while Tom and Huck Finn are in a graveyard, they witness an incident they should not have. Terrified, they flee from the spot, and swear a blood oath that they will never reveal their secret to anyone.

Tom and Huck then find themselves entangled in a series of real and exciting adventures, with dangerous men constantly at their heels.Can the boys stand up to the occasion, and become real-life heroes? Will they ever be able to reclaim their normal, carefree lives again? 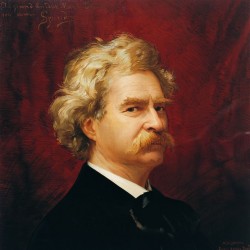 He is noted for his novels Adventures of Huckleberry Finn (1885), called "the Great American Novel", and The Adventures of Tom Sawyer (1876).

Twain grew up in Hannibal, Missouri, which would later provide the setting for Huckleberry Finn and Tom Sawyer.

He apprenticed with a printer. He also worked as a typesetter and contributed articles to his older brother Orion's newspaper.

After toiling as a printer in various cities, he became a master riverboat pilot on the Mississippi River, before heading west to join Orion.

He was a failure at gold mining, so he next turned to journalism. While a reporter, he wrote a humorous story,

"The Celebrated Jumping Frog of Calaveras County," which proved to be very popular and brought him nationwide attention. His travelogues were also well-received. Twain had found his calling.

He achieved great success as a writer and public speaker. His wit and satire earned praise from critics and peers, and he was a friend to presidents, artists, industrialists, and European royalty.

However, he lacked financial acumen. Though he made a great deal of money from his writings and lectures, he squandered it on various ventures, in particular the Paige Compositor, and was forced to declare bankruptcy.

With the help of Henry Huttleston Rogers, however, he eventually overcame his financial troubles.

Twain worked hard to ensure that all of his creditors were paid in full, even though his bankruptcy had relieved him of the legal responsibility.

Born during a visit by Halley's Comet, he died on its return. He was lauded as the "greatest American humorist of his age", and William Faulkner called Twain "the father of American literature".