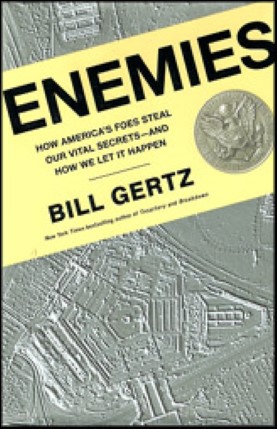 Taking advantage of gaping holes in America’s defenses, terrorist organizations and enemy nations like Communist China, North Korea, Russia, and Cuba—not to mention some so-called friends—are infiltrating the U.S. government to steal our most vital secrets and use them against us. And most astonishing of all, our leaders are letting it happen.

In the explosive new book Enemies, acclaimed investigative reporter Bill Gertz uncovers the truth about this grave threat to our national security and America’s harrowing failures to address the danger. Gertz’s unrivaled access to the U.S. intelligence and defense communities allows him to tell the whole shocking story, based on previously unpublished classified documents and dozens of exclusive interviews with senior government and intelligence officials.

He takes us deep inside the dark world of intelligence and counterintelligence—a world filled with lies and betrayal, spies sleeping with enemy spies, and moles burrowing within the FBI, the CIA, the Pentagon, and even the White House.

• The untold story of one of the most damaging enemy spy penetrations in U.S. history—and how the FBI bungled the investigation

• How Communist China’s intelligence and influence operations may have reached the highest levels of the U.S. government

• How al-Qaeda and other terrorist groups use official identification, uniforms, and vehicles to infiltrate secure areas and carry out attacks

• A startling account of the many enemy spies the U.S. has let get away

• The gross ineptness that led U.S. officials to hound an innocent man while the real mole operated right under their noses

• Why aggressive counterintelligence represents the only real defense against terrorists and enemy spies—and why the U.S. intelligence bureaucracy resists it

Delivering the kind of shocking new information that led Washington Monthly magazine to declare him “legendary among national security reporters,” Bill Gertz opens our eyes as never before to deadly threats and counterintelligence failures that place every American at risk.

America’s enemies, including terrorist organizations, are stealing our most vital secrets to use against us—and the U.S. government makes it shockingly easy for them to do so. Filled with headline-making revelations from acclaimed reporter Bill Gertz, Enemies reveals the frightening untold story of the War on Terror

Also available as an eBook 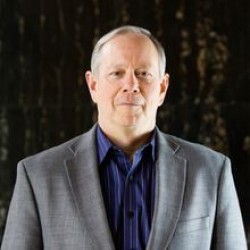 Bill Gertz is an award-winning national security journalist and author of seven books. He is currently senior editor of The Washington Free Beacon, (freebeacon.com), an online news outlet, and National Security Columnist for The Washington Times (www.washingtontimes.com).

Bill also is the editor and publisher of Flash//CRITIC Cyber Threat News (flashcritic.com), a news site that highlights the growing challenge of cyber security threats.

Bill has an international reputation. Vyachaslav Trubnikov, head of the Russian Foreign Intelligence Service, once called him a "tool of the CIA" after he wrote an article exposing Russian intelligence operations in the Balkans. A senior CIA official once threatened to have a cruise missile fired at his desk at The Washington Times after he wrote a column critical of the CIA's analysis of China. China's communist government also has criticized him for his news reports exposing China's weapons and missile sales to rogues states, accusing him of "spreading lies about China." The state-run Xinhua news agency in 2006 identified Bill as the No. 1 "anti-China expert" in the world. Bill insists he is very much pro-China -- pro-Chinese people and opposed to the communist system.

Former CIA Director R. James Woolsey has stated: "When I was DCI [Director of Central Intelligence] Bill used to drive me crazy because I couldn't figure out where the leaks were coming from. Now that I've been outside for two years, I read him religiously to find out what's going on." During the 1990s, Secretary of Energy Bill Richardson told the author: "We talk about your stories at Cabinet meetings." Defense Secretary William S. Cohen once remarked to China's military intelligence chief that Bill "has access to more intelligence information than anyone I know."

Former Defense Secretary Donald H. Rumsfeld once told him: "You are drilling holes in the Pentagon and sucking out information."

He studied English literature at Washington College in Chestertown, Md., and journalism at George Washington University, Washington, DC. In March 2014, Bill was awarded the Reed Irvine Award for Investigative Journalism by Accuracy in Media. In September 1999, Bill was awarded the Western Journalism Center award for investigative journalism. The United States Business and Industrial Council awarded him the "Defender of the National Interest Award" in June 1998, and in 1997 he was recognized by The Washington Times for excellence in achievement.