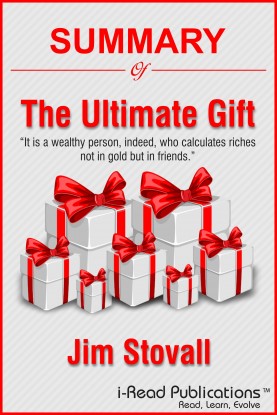 What would you do to inherit a million dollars? Would you be willing to change your life? Jason Stevens is about to find out in Jim Stovall's The Ultimate Gift. Red Stevens has died, and the older members of his family receive their millions with greedy anticipation.

But a different fate awaits young Jason, whom Stevens, his great-uncle, believes may be the last vestige of hope in the family. "Although to date your life seems to be a sorry excuse for anything I would call promising, there does seem to be a spark of something in you that I hope we can fan into a flame.

For that reason, I am not making you an instant millionaire." What Stevens does give Jason leads to The Ultimate Gift. Young and old will take this timeless motivational story to heart.

1. The importance of work and thirst for knowledge in life.

2. How friends and family form an integral part of you.

3. The importance of money and dealing with problems in life.