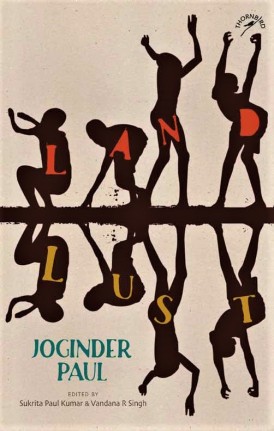 Evocative and crisp, Joginder Paul’s Urdu stories from Dharti ka Kaal are translated into English in land lust. His stories offer poignant glimpses of multiracial relations in colonial Kenya and evoke insightful moments of compassion from within harsh xenophobic environs.

Paul’s characters breathe life into Paper and touch readers not just intellectually but visceral in these stories, we confront nature and its wildness and see a palpable connection between people and their land. Land lust attracts empathetic attention to divisive follies of race and colour and interrogates notions of progress and development.

The writer deftly asserts the dignity of black people by including their voices and predicament in these stories.

Joginder Paul (1925–2016) was born in Sialkot (now in Pakistan). His first story was published in the well-known Urdu journal Saqi in 1945, while his first book of short stories in Urdu, Dharti ka Kaal, was published in 1962. The partition of the country resulted in his migration to Ambala as a refugee. His marriage led to another migration — to Kenya, where he taught English, throughout expressing in his stories the angst of being in exile. Back in India in 1965, he was principal of a college in Aurangabad, Maharashtra, for another fourteen years before coming to settle in Delhi for full-time writing.

Joginder Paul published over thirteen collections of short stories, including Khula, Khodu Baba ka Maqbara and Bastian. Amongst his novels are Ek Boond Lahoo Ki, Nadeed, Paar Pare, and Khwabro. He published four collections of flash fiction (afsaanche), a genre with which he is known to have enriched Urdu fiction significantly. A number of his novels and short stories have been translated into Hindi, English and other languages in India and abroad. His fiction books have been previously published many times in English.

Paul is a recipient of many important literary honours, including the SAARC Lifetime Award, Iqbal Samman, Urdu Academy Award, All India Bahadur Shah Zafar Award, Shiromani Award, and Ghalib Award. He was also honoured at Qatar with an international award for contributing to creative writing in Urdu. His fiction has received a lot of critical acclaim, and many Urdu journals in India and Pakistan have published special issues on him. His fiction has been translated into many languages in India and abroad.