Home / Books / Your Vote is not Enough: A Citizens’ Charter to Make a Difference 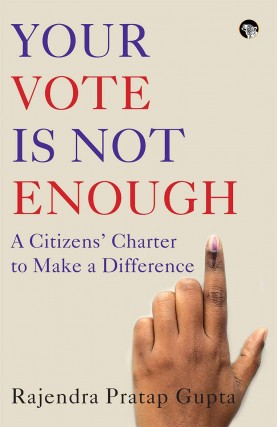 Your Vote is not Enough: A Citizens’ Charter to Make a Difference

In this timely and comprehensive book, a professional with rare experience in policy making reminds us that merely casting our votes is never sufficient, we must be constantly involved with the decisions which affect us in our daily lives, and the country.

Did you know that: • Flawed policies—in the economy, in governance and in legislation—are the biggest reason why India, despite its demographic advantage, lags behind in many indices of growth and progress • Draft policies are routinely put up in the public domain for citizens’ feedback, yet receive very little response • Policies, even after they are ratified, can always be contested and changed if they don’t suit the country through various means • We can always get in touch with our political representatives, at the district, state and national levels, and offer our suggestions on the policies which affect us, but we rarely do so Your Vote Is Not Enough covers a diverse range of issues—from agriculture, the economy, defence, retail and job markets to technology, governance and administration, among others—to demonstrate how a lack of engagement on our part as citizens has led to the many problems which plague these sectors.

And even as it points this out, the book also provides practical and concrete solutions. These innovative solutions range from the systemic to the technological—a self-sustaining district-level agency to facilitate and encourage entrepreneurship across India; a mobile application which will serve not only as a database for the unorganized labour force of the country but also connect them with prospective employers; and a plan to completely transform the bureaucratic culture to make it more citizen friendly and performance driven. Written with authority and conviction, Your Vote Is Not Enough is a reminder, not only to citizens of the country but also its leaders and policy makers, about all that we must do to take our rightful place as a developed nation which has ensured peace and prosperity for all its citizens."

Rajendra P. Gupta has been involved in policy making for a decade and played a key role in drafting the policies enshrined in the election manifesto of the Bharatiya Janata Party in 2014. In 2009, he founded the Disease Management Association of India (DMAI), which was granted a special consultative status with the United Nations Economic and Social Council for its outstanding work. He is on the Expert Network of the World Economic Forum and has been an advisor to the Union Minister for Health and Family Welfare and he has also served as a member of the Education Policy Committee of the Ministry of Human Resource Developme