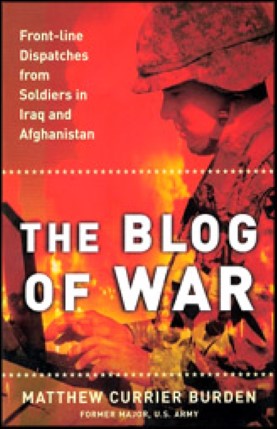 The Blog Of War.

Matthew Currier Burden founded www.blackfive.net, one of the most popular military blogs on the Internet. His blog began as an homage to a friend killed on duty in Iraq and quickly became a source of information about what was really happening in Afghanistan and Iraq.

In The Blog of War Burden presents selections from some of the best of the military blogs, the purest account of the many voices of this war. This is the first real-time history of a war, a history written even as the war continues. It offers a glimpse into the full range of military experiences in Afghanistan and Iraq, from the decision to enlist right through to homecoming.

There are powerful stories of soldiers in combat, touching reflections on helping local victims of terror and war, pulse-racing accounts of med-evac units and hospitals, and heartbreaking chronicles of spouses who must cope when a loved one has paid the ultimate price. The Blog of War provides an uncensored, intimate, and authentic version of life in the war zone. Dozens of voices come together in a wartime choir that conveys better than any second-hand account possibly can what it is like to serve on the front lines.

Matthew Currier Burden ("Blackfive") enlisted in the military at age seventeen. He served first as an Army aircraft crew chief, then a paratrooper, before joining Special Operations. After receiving a commission as a cavalry officer and serving in Europe and Asia, he later became an intelligence officer for the Defense Intelligence Agency (DIA).

He left the military in July 2001 as a major in the U.S. Army Reserve. He is now an IT executive in Chicago. Visit Matt Burden at www.blackfive.net.