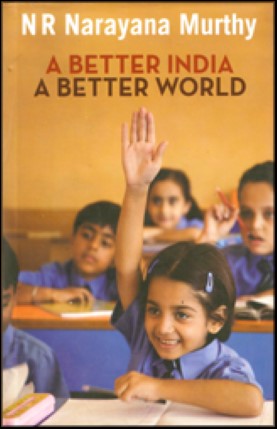 A Better India A Better World.

At a time when India is battling huge problems of its own and is struggling to break free from the shackles of poor governance, A Better India comes as a remarkably well-worded book telling us the simple things that need to be done right. Written by N. R. Narayana Murthy, this book offers some simple solutions to seemingly complex problems.

In India, there lies a great disparity in the distribution of wealth. There is a great divide that exists between the poor and the rich and the facilities available to both of them. The challenge that lies in front of the administration is to bridge that divide

So the pertinent question relates to how that divide is going to be bridged. The book talks about the ways to fulfill Gandhi's dream where the fruits of development would be available to every man, woman and child. The proverb of Sarve Jana Sukhino Bhavantu' or happiness to every man, is a long cherished dream of our founding fathers.

N. R. Narayana Murthy offers a fairly simple solution to these problems in his book A Better India. He argues very articulately in favor of strong values and good leadership in governance. Drawing excerpts from the path-breaking Infosys story which led to him run a successful business, the author lays down the fundamental rules for development of the masses.

Published by Penguin India in 2010, A Better India is available in paperback 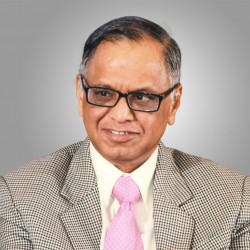 N. R. Narayana Murthy serves on the Ford Foundation Board of Trustees. Murthy co-founded Infosys, an international software services firm based in Bangalore, India, in 1981. He was the company's CEO until 2002 and its chairman through the following decade. He is currently a trustee of the board of the Infosys Science Foundation. Previously, from 1977 to 1981, he headed Patni Computer Systems.

Murthy is a partner at Catamaran Advisors LLP and Catamaran Ventures LLP, and he serves as director of NRN Holdings Pvt. Ltd. and Soroco India Pvt. Ltd. He is a trustee of Murty Foundation and Murty Trust, and his other board affiliations include the United Nations Foundation, the Institute for Advanced Study, the National Institute of Engineering (Mysore), and the Public Health Foundation of India. He is also a presidential councilor of Cornell University.

Murthy received a bachelor's degree in electrical engineering from the University of Mysore and a master of technology degree from the Indian Institute of Technology in Kanpur.