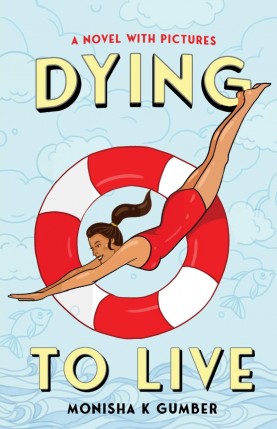 When nothing matters anymore… Megha, a young super-achiever with a perfect life has all that is needed to be happy. After all why wouldn’t she? A swimming champion, school topper, popular, good-looking girl with amazing friends and loving parents. What more could a girl ask for? A lot, actually.

Because even when she has it all; she sulks and does the unthinkable. A grave mistake that could take her to her grave. But survivor that she is, she breaks through the wall of ‘perfections’ and accepts that she is what she is: sad, vulnerable and confused. Oh, don’t get her wrong, as she puts up a tough fight to reach where she is meant to be.

And on the way learns some lessons that will take her through this amazing journey called life. A happy kind of life.

Monisha K. Gumber is the author of a newly released teen book called Sick of Being Healthy that received an unexpectedly high positive response from the kids all over India as well as Bahrain where she lives with her husband and two children. Surprised by the warmth and support from her so many readers, she realised that Indian teens still don’t have feel-good contemporary stories that they could relate to. Yes, there are romance novels and English classics and even fun books like the Wimpy Kid series but most books meant for teens end up being a lecture on Moral Science. Monisha does not think there is anything wrong in those, but that’s just not her style.

Monisha wants to write books that are entertaining and yet make a difference in the lives of kids who are under more pressure than ever before. So, this second book in the series, called Dying to Live, is an attempt to talk about a burning problem of youth suicide and how millions of students succumb to the pressure of ever-increasing expectations from well-meaning parents and teachers. The book has a light undertone but the lessons inside are serious and hopefully profound.

Being the daughter of a retired army officer, she is greatly influenced by the great Indian Army and her books reflect that. She won many National- and State-level drawing competitions as a student and went on to do the usual MBA. She has many years of corporate experience in the field of Marketing and HR but is now gradually giving it all up to pursue her new love – writing. She wishes to be loved as a writer who has a sense of humour but still writes meaningful stories. Monisha is also passionate about alternative healing and wishes true health and happiness for all.She has a growing community of more than a hundred thousand online followers and you can check out her popular videos, pictures and posts on facebook.