Available
"If I had one wish in all the world, I wouldn't wish to win the lottery. Nor would I wish for true love. No, if I had one wish I would wish to have a model's figure, probably Cindy Crawford's, and I would extend that wish into having and keeping a model's figure, no matter what I eat." Jemima Jones is overweight. About 98 pounds overweight. Treated like a maid by her thin social-climbing roommates, and lorded over by the beautiful Geraldine (less talented but better paid) at the Kilburn Herald, Jemima's only consolation is food. Add to this her passion for her charming, sexy, and unobtainable colleague Ben, and Jemima knows her life is in need of a serious change. When she meets Brad, an eligible California hunk, over the Internet, Jemima has the perfect opportunity to reinvent herself--as JJ, the slim, beautiful, gym-obsessed glamour girl of her dreams. But when her long-distance Romeo demands that they meet, she must conquer her food addiction to become the bone-thin model of her e-mails-- no small feat. This is just the beginning of Jemima's transformation, a process that takes her through enormous physical and emotional change and halfway around the globe. First published in the UK to great fanfare, Jemima J spent nine weeks on the bestseller lists. Jane Green's brilliant wit, warm sense of humor and honesty ensure that her success will continue--on both sides of the Atlantic. Jemima J is a heroine who'll work her way into your heart, making you laugh through foible and folly as she sets out to reinvent her life and along the way learns a host of lessons about attraction, addiction, the meaning of true love, and, ultimately, who she really is. With a fast-paced plot and a surprise ending no reader will see coming, Jemima J is the chronicle of one woman's quest to become the woman she's always wanted to be. --This text refers to an out of print or unavailable edition of this title. 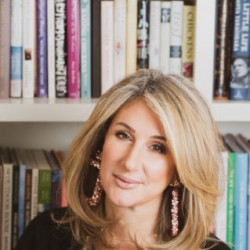 Jane Green's eighteenth novel, Falling, is soon to be released with Berkley/Penguin; she is the author of sixteen previous New York Times Bestselling novels, and known as one of the world's leading authors in women's fiction, with over ten million books in print, and translations in over 25 languages.

A former journalist in the UK, she has had her own radio show on BBC Radio London, and is a regular contributor on radio and TV, including as well as regularly appearing on television shows including Good Morning America, The Martha Stewart show, and The Today Show.

Together with writing books and blogs, she contributes to various publications, both online and print, including anthologies and novellas, and features for The Huffington Post, The Sunday Times, Cosmopolitan and Self.

She has taught at writers conferences, and does regular keynote speaking, and has a weekly column in The Lady magazine, England’s longest running weekly magazine.

A graduate of the French Culinary Institute in New York, Green is bringing out her first cookbook: Good Taste , with Berkley in October 2016.She is a storyteller for The Moth radio hour on NPR,

and lives in Westport, Connecticut with her husband and their blended family. When she is not writing, cooking, gardening, filling her house with friends and herding chickens, she is usually thanking the Lord for caffeine-filled energy drinks.

A cancer survivor, she continues to raise awareness for Malignant Melanoma, Hashimoto's Disease, and Lyme Disease.