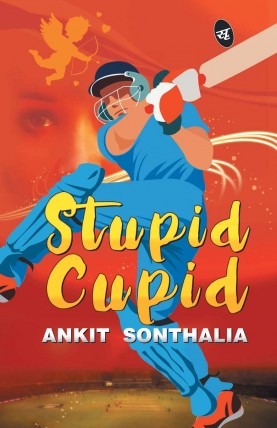 Engineer? Doctor? Chartered Accountant? Artist? Or something out of the box?
Students at the cusp of passing out from the high school are often occupied with such considerations and choices. With Suhaan, it was different. He wanted to do nothing. “Go with the flow” had been the motto of his life and he had always given life a chance to make decisions for him.
It’s only when he starts playing cricket for the college team that his passion is fuelled. He practices hard and gives it his all. But life is still keen on planning Suhaan's life. When he falls in love with Namrata, he is forced to choose one – passion or love. Will Suhaan make the right choice? Or will life once again call the shots for him?
Stupid Cupid is a tug of war between dreams and love.

After seeing a lot of buzz on social media about a novel titled Stupid Cupid written by someone from Surat, we thought of meeting the man behind it, Mr. Ankit Sonthalia.

Ankit is an engineer by education and a real estate developer in Surat. We thought we were going to meet someone who would be very serious (as writers generally are) but to our surprise, Ankit was very lively, cheerful and was as excited as a child about his debut novel.

When we asked Ankit what inspired him to write, he smilingly said, ‘My wife, Ankita. After a successful attempt of impressing her through my writings and convincing her to marry me, I decided to showcase my writing skills through Stupid Cupid.’

He also invited us and all his fellow Sorties to the book launch which is on 10th July, 11-1pm at the newly constructed CANOPUS mall, near Kakatiya Complex @ God Dodd Road.

Ankit’s first work is selected to be published by a renowned publishing house of India. Stupid Cupid is a work of fiction.

It is a story about a guy named Shaan. Shaan is aimless in life but once he starts playing cricket, he follows it passionately.

Just when everything seems to be going right, Cupid strikes and Shaan is forced to choose between love and passion.

Interesting, right? After listening to the plot, we could not contain our excitement and immediately ordered our copies.

You can book your copies too at

Stupid Cupid will also be available at all the book stores across India. E-book is also available.

We wish Ankit all the success. We Sureties are proud of you.