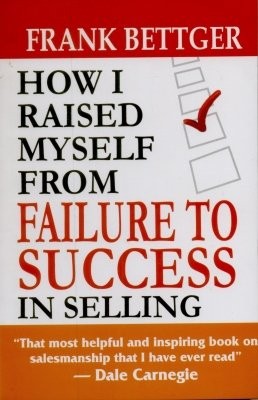 How I Raised myself from Failure to Success In Selling

A business classic endorsed by Dale Carnegie, How I Raised Myself from Failure to Success in Selling is for anyone whose job it is to sell. Whether you are selling houses or mutual funds, advertisements or ideas—or anything else—this book is for you.

When Frank Bettger was twenty-nine he was a failed insurance salesman. By the time he was forty he owned a country estate and could have retired. What are the selling secrets that turned Bettger’s life around from defeat to unparalleled success and fame as one of the highest paid salesmen in America?

The answer is inside How I Raised Myself from Failure to Success in Selling. Bettger reveals his personal experiences and explains the foolproof principles that he developed and perfected. He shares instructive anecdotes and step-by-step guidelines on how to develop the style, spirit, and presence of a winning salesperson. No matter what you sell, you will be more efficient and profitable—and more valuable to your company—when you apply Bettger’s keen insights on:

• The power of enthusiasm

• How to conquer fear

• The quickest way to win confidence

Franklin Lyle (Frank) Bettger (1888-1981) was a salesman and self-help author. He was the father of longtime actor Lyle Bettger. He played Major League baseball with the St. Louis Cardinals in 1910 under the name Frank Betcher.

After his brief baseball career, Bettger returned to his native Philadelphia, where he started collecting accounts for a furniture store on a bike. He then started selling insurance, but was not successful and considered quitting after 10 months.

Finally, Bettger succeeded and later became the author of the best-selling books How I Raised Myself from Failure to Success in Selling[1] and How I Multiplied My Income and Happiness in Selling.