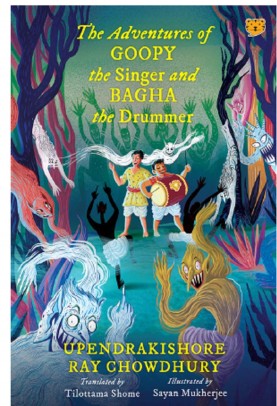 The Adventures Of Goopy The Singer And Bagha The Drummer

Goopy Gyne and Bagha Byne have both been banished from their villages for being horrible musicians. They happen to meet each other and become good friends. When they decide to play their music in a thick and scary forest one night, they are heard by the ghosts who live there. The ghosts love their music and the King of Ghosts grants them three boons. With these boons, Goopy and Bagha set out to perform for the king of the land, and earn laurels. But when they scare the king by appearing suddenly in his room, they themselves are accused of being ghosts and locked away.

Will Goopy and Bagha be able to escape and do what they love the best—play music for everyone? Will they stop the kingdoms of Halla and Shundi from going to war? And how many sweets and how much pulao will they eat while they do so?

Upendrakishore Ray Chowdhury’s well-loved and hilarious story of friendship, music and magic now appears in a delightful new translation along with beautiful illustrations. Read on for descriptions of pots of food and escapades that will keep you laughing till the last page.

Upendrakishore Ray Chowdhury (1863-1915) was a prolific children’s writer from Bengal. His works Goopy Gyne Bagha Byne, Tuntunir Boi, Chheleder Ramayan, Chheleder Mahabharat and more, are all classics of Bengali children’s literature. He edited and published the children’s magazine Sandesh, for which he wrote and illustrated stories, poems and essays. He was also a pioneering printer, musician, entrepreneur and painter. His son, Sukumar Ray, was an equally celebrated writer, as was his grandson Satyajit Ray, the film-maker.