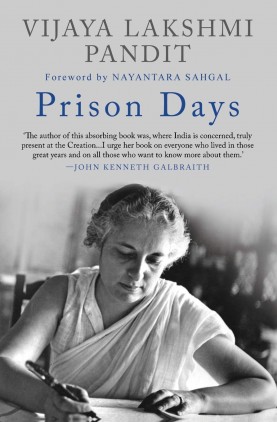 When Mahatma Gandhi gave the call for the nation to join in the freedom struggle, Vijaya Lakshmi Pandit threw herself wholeheartedly into the Movement, along with her father, Motilal Nehru, brother Jawaharlal, and husband, Ranjit Sitaram Pandit. Prison Days is an account of her third and final term in Naini Central Jail in Allahabad. She was arrested on 12 August 1942. World War II was on, the country was under military rule and arrest and imprisonment took place without trial. Several lorries filled with armed policemen arrived that night at Anand Bhawan to arrest one lone, unarmed woman.

Vijaya Lakshmi Pandit was soon joined in jail by her 25-year-old niece, Indira Gandhi. In this diary, Pandit recounts her experiences in jail and the hardships she endured along with others who had joined the fight for freedom: rations mixed with dirt and stones, a lack of water and sanitary facilities, surviving on an allowance of 9 annas a day, and only the hard ground to sleep on.

Though it is more the personal, day-to-day details of her life that fill Pandit’s jail diary, it is the politics of the day—the overarching desire to throw off the shackles of British rule and Mahatma Gandhi’s unique approach of non-violence and non-cooperation to achieve this, that define the book. It is this that gives Vijaya Lakshmi Pandit and her fellow prisoners the courage to carry on the fight with unbroken spirits—and at the stroke of the midnight hour on 15 August 1947, victory was theirs. India was reborn as an independent nation

Born at the turn of the twentieth century, in 1900, Vijaya Lakshmi Pandit was the daughter of Motilal Nehru and his second wife, Swaruprani. She played a key role in India’s freedom struggle. After Independence, Pandit entered the diplomatic service and served as India’s ambassador to the Soviet Union, the United States, Mexico and Ireland. She was also the Indian High Commissioner to the United Kingdom. In 1953, she became the first woman President of the United Nations General Assembly. In India, she served as Governor of Maharashtra from 1962 to 1964, after which she was elected to the Lok Sabha. Her writings include The Evolution of India (1958) and Prison Days.