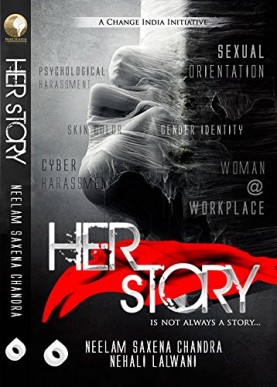 "Women are pillars to the development of any society. A nation cannot develop unless and until the women of the country get educated, skilled and progressed. Our country is right now going through the transformation and it is but natural, that many women will step out of the comforts of their houses to work. And when women work, they do need support from their family, their kith and kin and also their colleagues and superiors. The question is ‘Are we ready for this change?’

The anthology ‘Her Story’ has been compiled from an all India contest in which best of authors have come up with different issues which a woman has to tackle in her work place or related to her duties. There are stories related to matters related to actual working such as gender bias, colleagues or seniors trying to think of her as an object of lust, security etc. to general social concerns such as support from her family and society.

Women are no doubt strong and can work anyway, but a conducive environment goes in a long way to shape her personality."

You can order your copy from - http://goo.gl/BNGJio 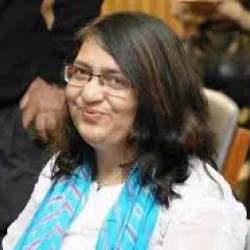 Neelam Saxena Chandra is an Engineering graduate from VNIT and has done her Post Graduation Diploma in IM&HRD and also in Finance. She has completed a course in Finance from London School of Economics. She works as General Manager (Systems) in Pune Metro, and is well known as an author/poet/novelist/children’s writer. She writes on a variety of topics, ranging from social issues to motivational stories/poems.

She is a bilingual writer; writing in English and Hindi. She holds two records with the Limca Book of Records -2015 for being the Author having the highest number of publications in a year in English and Hindi and for her daughter and she being the first mother-daughter duo to write a book. She also holds a record with Limca Book of Records 2017 with her sister Nikita for being the first pair of sisters to write a book. She has won II prize in a poetry contest organized by American Embassy and in a National poetry contest organized by Poetry Council of India, 2016. She has received Humanity International Women Achiever Awards 2018, SonInder Samman 2018 (Hindi), Bharat Nirman Literary award in 2017, Premchand award by Ministry of Railways, Rabindranath Tagore International Poetry award, II prize by Children’s Book Trust, 2010, Freedom award by Radio city for Lyrics along with other awards and honors. She was listed in Forbes as one among 78 most popular authors in the country in 2014.