The saga of India's first and the highest ranked woman officer in the Indian Police Service - who pioneered a humane method of policing - marked by willpower, devotion to duty, innovation, compassion and, above all, a never-say-die attitude
The eyewitness account - forthright and unsparing - in this fully revised and updated edition provides a well-documented exposé of the sabotage of police reforms (to be implemented as per a verdict of the Supreme Court of India) by certain bureaucrats and by some members of Kiran Bedi's own service. These persons also blocked her appointment as police commissioner. This kind of sabotage was the proverbial last straw that compelled her to 'shake off the shackles'. After a long and rewarding innings (35 years in all), Kiran Bedi decided to move on.

She believed that she could no longer work with persons who were keeping the system enslaved. She was clear in her mind that she was not going to be subordinated by this team of saboteurs. What direction and leadership would such persons provide except to create pygmies and stifle initiative and crush morale? She did not want to be a part of such dubious 'history'. As she asserts: 'My self-respect, my innate sense of justice and my beliefs and values in life propelled me to throw off the "yokes" that were already obstructing my growth and I now made up my mind to set myself free and be a master of my own time.' This is a no-holds-barred narrative packed with punch, spirit and vitality. Chosen as 'India's most admired woman', Kiran Bedi is a highly recognized and decorated police officer, who has won several accolades, including the Ramon Magsaysay Award for Government Service.

Throughout her career, Kiran Bedi (who joined the Indian Police Service in 1972) dared to remain innovative to meet the challenges posed by her different assignments: be it policing, managing prisons or imparting training. She won the admiration and respect of millions, both outside and within India. 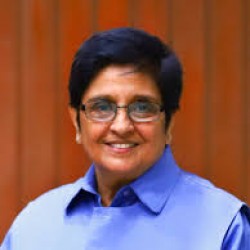 Kiran Bedi is an Indian politician belonging to the Bharatiya Janata Party (BJP). She is currently the Lieutenant Governor of the union territory of Puducherry. Bedi took to politics after retiring from Indian Police Service (IPS) in 2007. She was the first Indian woman to join the officer’s ranks of IPS in 1972.

During her stint in the IPS, she had served in the position of the Director General at the Bureau of Police Research and Development. Bedi is also noted for her role as a social activist. The winner of the Magsaysay Award in 1994, Kiran Bedi has been one of the active members of the Anna Hazare-led civil society that launched a movement for the enactment of a strong anti-corruption law, the Jan Lokpal Bill.

She formally joined the Bharatiya Janata Party (BJP) on 15 January, 2015 and was selected as the party's chief ministerial candidate for the 2015 Delhi Assembly elections.