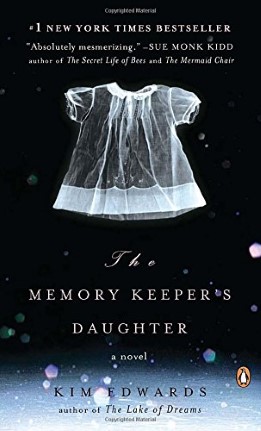 Kim Edwards’s stunning novel begins on a winter night in 1964 in Lexington, Kentucky, when a blizzard forces Dr. David Henry to deliver his own twins. His son, born first, is perfectly healthy, but the doctor immediately recognizes that his daughter has Down syndrome. Rationalizing it as a need to protect Norah, his wife, he makes a split second decision that will alter all of their lives forever.

He asks his nurse, Caroline, to take the baby away to an institution and never to reveal the secret. Instead, she disappears into another city to raise the child herself. So begins this beautifully told story that unfolds over a quarter of a century—in which these two families, ignorant of each other, are yet bound by the fateful decision made that winter night long ago.

A family drama, The Memory Keeper’s Daughter explores every mother's silent fear: What would happen if you lost your child and she grew up without you? It is also an astonishing tale of love and how the mysterious ties that hold a family together help us survive the heartache that occurs when long-buried secrets are finally uncovered. 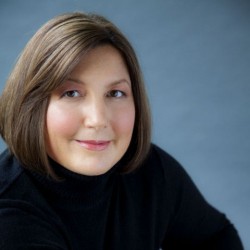 Kim Edwards grew up in Skaneateles, New York, in the heart of the Finger Lakes region. The oldest of four children, she graduated from Colgate University and the University of Iowa, where she received an MFA in Fiction and an MA in Linguistics.

After completing her graduate work, she went with her husband to Asia, where they spent the next five years teaching, first on the rural east coast of Malaysia, then in a small city an hour south of Tokyo, and finally in Phnom Penh, Cambodia.

During her time in Asia, Kim began to publish short fiction, and in 1990 her story “Sky Juice” won the Nelson Algren Award.

Her stories and essays have since appeared in a wide range of periodicals, including Ploughshares, Zoetrope, Antea us, Story, and The Paris Review.

They have won many honors, including a National Magazine Award for Excellence in Fiction and a Pushcart Prize, as well as inclusion in The Best American Short Stories.

Two of her stories have been performed at Symphony Space and broadcast on Public Radio International.

Kim has also received support from the National Endowment for the Arts and the Kentucky Arts Council, among others. Her story collection The Secrets of a Fire King was short-listed for the 1998 Pen/Hemingway Award.

Penguin will reissue The Secrets of a Fire King in 2007.Kim Edwards received a Whiting Writers’ Award in 2002.

She has taught in the MFA programs at Warren Wilson and Washington University, and is currently an assistant professor at The University of Kentucky.

Her novel, The Memory Keeper’s Daughter, was selected for a Barnes and Noble Discovery Award and won the Kentucky Literary Award for Fiction in 2005.