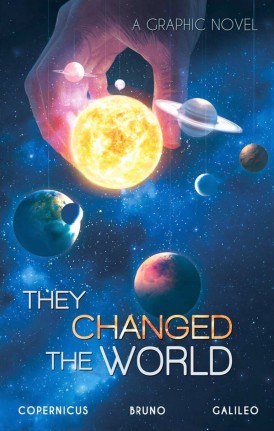 In the 15th Century, most astronomers agreed that the Earth was the center of the universe. This idea dated back more than 1000 years, to the Greek astronomer Ptolemy, who stated that the Earth was motionless, and that all other heavenly bodies moved in complicated patterns around the Earth. This became the accepted view of the Catholic Church, an institution so powerful that few would dare to question it. Until Copernicus, Bruno and Galileo…

Learn the life stories of these three great minds, their struggles against authority and their great breakthroughs, which led to the triumph of science and humanity.

Rik Hoskin is a comic book writer and novelist from England. In the comic book field, Rik has written Superman, Star Wars, Doctor Who, Shrek and over 400 stories for Disney and Pixar characters, among many others. As a novelist, Rik is currently writing a series of original books based on the television series, Hercules, the Legendary Journeys.

He has previously written twenty-four novels under the pen-name 'James Axler'. As Axler, Rik was the primary writer on the Outlanders series for seven years, and contributed five novels to the popular post-apocalyptic Deathlands series.