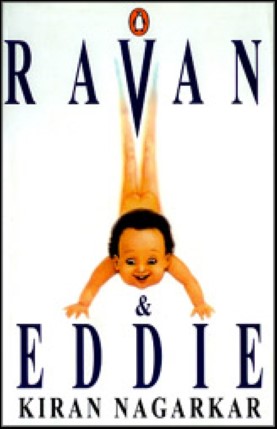 Written by Kiran Nagaraj, Raven And Eddie is a humorous tale of two boys, a Hindu and a Christian, and the people living in Mumbai s chawls.

This hilarious book revolves around two boys, Raven, a Marathi Hindu, and Eddie, a Roman Catholic. The book has been set in the 1950s, just a few years after India obtained her independence. The religion and caste based division prevalent in the British Raj are still existing.

Raven and Eddie dwell in a chawl in Mumbai s Mazagaon area, and it is the events in their life in this chawl that make up the contents of this book. Raven And Eddie sets off with an incident that can change many lives. When Eddie is still in his mother s womb, his father, Victor Coutinho, is head over heels in love with Raven s mother,

Parvati-bai. One day, he stands gazing at Parvati-bai hanging out clothes in the balcony of the fourth floor. He ends up catching little Raven s interest, who decides to jump off his mother s grip towards Victor. Victor catches hold of Raven, but Victor falls dead.

Eddie grows up hearing that Raven is the reason behind the death of his father. Trouble seems to be his constant companion and he always avoids being around Raven. Soon, he decides to join the Hindu Sabha, which enrages his mother, who pulls him to their church and gets him exorcised.

At the same time, the Christian ways have always made Raven curious. Raven is confused about his religious philosophy and cannot understand why people call him a murderer.

Raven and Eddie, authored by Kiran Nagaraj, describes the lives of the chawl and the people living there. The lives of the middle-class families who dwell there are mostly unhappy. They are disgruntled at living in such close quarters. The life in the chawl has been detailed in the book by the author. It describes the situations where everybody has a say in everything that everyone does.

Raven and Eddie has been selected as one of the best ten novels about Mumbai. It takes its readers through a timeless journey of discovering oneself.