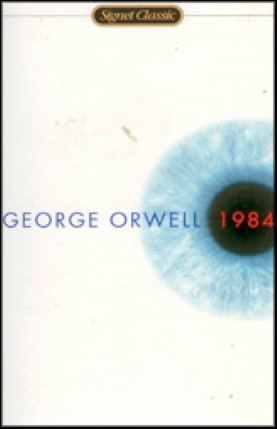 Available
George Orwell's prophetic, nightmarish vision of "Negative Utopia" is timelier than ever-and its warnings more powerful. The Merriam-Webster Encyclopedia of Literature Novel by George Orwell, published in 1949 as a warning about the menaces of totalitarianism. The novel is set in an imaginary future world that is dominated by three perpetually warring totalitarian police states. The book's hero, Winston Smith, is a minor party functionary in one of these states. His longing for truth and decency leads him to secretly rebel against the government. Smith has a love affair with a like-minded woman, but they are both arrested by the Thought Police. The ensuing imprisonment, torture, and reeducation of Smith are intended not merely to break him physically or make him submit but to root out his independent mental existence and his spiritual dignity. Orwell's warning of the dangers of totalitarianism made a deep impression on his contemporaries and upon subsequent readers, and the book's title and many of its coinages, such as NEWSPEAK, became bywords for modern political abuses. --This text refers to an out of print or unavailable edition of this title.

The author of Animal Farm is George Orwell. His real name was Eric Arthur Blair. He was a very popular novelist, essayist, critic and journalist.

His works spoke out against the social injustice that was prevalent at that time. He was in favor of democratic socialism and was opposed to totalitarianism.

He continues to be held in high esteem as one of the most influential voices of his time, who spoke out about the English culture, as it was, during his lifespan.