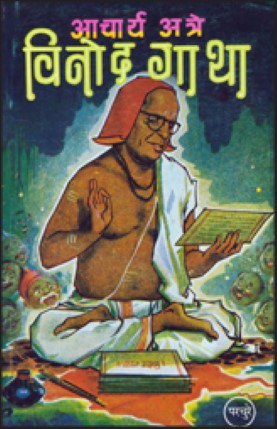 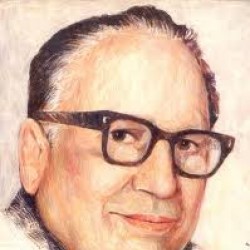 Prahlād Keshav Atre (13 August 1898 – 13 June 1969), popularly known as Āchārya Atre, was a multi-faceted Indian figure. He was a prominent Marathi writer, a poet, an educationist, a newspaper founder–editor of Maratha (a Marathi language daily), a political leader, a movie producer–director–script writer and above all, a noted orator.

This multitalented personality known as Acharya Atre or P. K. Atre will be forever remembered by the people of Maharshtra for his writing, his wit and his generous nature.

His writing touched almost every area in literature - prose, poetry, plays et al. His speeches touched every heart in Maharashtra. He was a litterateur, educationist, film producer and director, journalist, orator and a leader, all rolled into one. His greatness lay in the fact that he reached incredible heights in each of his facets.

While working in the field of education he created an awareness of erstwhile and contemporary literature and thinking among students to create the love for Marathi language. He was highly regarded in literary circles and wrote under the pseudonyms of Makarand and Keshavkumar. His book Zhenduchi Phule (1925), a collection of his parody-poems, was very popular.

His plays rejuvenated the lackluster Marathi theatre and brought the audiences back to theatre. The plays Sashtang Namaskar (1933), Bhramacha Bhopla (1935), Lagnachi Bedi (1936), Ghara Baher (1934), Udyacha Sansar (1936) raked in large crowds. The term ‘House Full’ became popular during the play Ghara Baher. His play To Mee Navhech (1960), based on a true story, created history and is popular even today.

He considered the great playwright Ram Ganesh Gadkari as his mentor. One notices Gadkari’s influence in Atre’s plays. Although most of his plays deal with social ills and hypocrisy, the use of contempt, satire, sarcasm, ignorance and exaggeration in the plays helped capture people’s imagination and fascination.

Shyamchi Aai (1954), a film directed by him won the President’s gold medal while Mahatma Phule, directed by him again won the president’s bronze medal. He wrote the scripts for popular films like Dharmaveer, Premveer, Bhrahmachari and Brandychi Batli.

He guided people and made significant contributions to the Sanyukta Maharashtra Movement with his highly influential writing and speeches. His political skills were honed during this movement. His oratory and the newspaper (Maratha, Navyug) were his influential mediums. Obituaries and editorials were his speciality. His oratory skills enabled him to reach the masses through his speeches that were uncomplicated and often full of humor and wit.