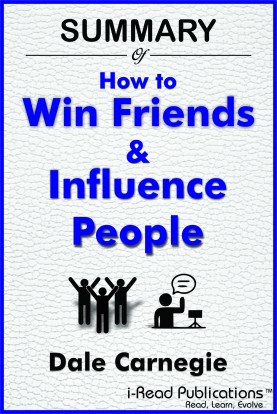 How to Win Friends and Influence People - Book Summary

This is the book that gave birth to a self-improvement industry that spans the Globe (according to the Daily Express Newspaper). First written in 1936, this is the 2016 edition specially typeset for easy readability and offering terrific value for money. The book has sold over 32 million copies worldwide and has been translated into every major language.

Still as vibrant and helpful as the day it was written it offers a simple set of guidelines, lucidly explained, that will enable every reader gain insights into being Popular, Persuasive, Influential and Happy in all of his or her relationships.

1. How to make new friends, acquire new clients and customers.

2. How to influence people without invalidating their views.

3. How to become an excellent converser. 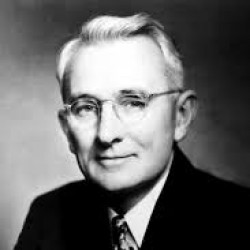 Born in poverty on a farm in Missouri, he was the author of How to Win Friends and Influence People, first published in 1936, a massive bestseller that remains popular today.

He also wrote a biography of Abraham Lincoln, titled Lincoln the Unknown, as well as several other books.

Carnegie was an early proponent of what is now called responsibility assumption, although this only appears minutely in his written work.

One of the core ideas in his books is that it is possible to change other people's behavior by changing one's reaction to them.

In his teens, though still having to get up at 4 a.m. every day to milk his parents' cows, he managed to get educated at the State Teacher's College in Warrensburg.

His first job after college was selling correspondence courses to ranchers; then he moved on to selling bacon, soap and lard for Armor & Company.

He was successful to the point of making his sales territory of South Omaha, Nebraska the national leader for the firm.

After saving $500, Carnegie quit sales in 1911 in order to pursue a lifelong dream of becoming a Chautauqua lecturer.

He ended up instead attending the American Academy of Dramatic Arts in New York, but found little success as an actor, though it is written that he played the role of Dr. Hartley in a road show of Polly of the Circus.

[citation needed] When the production ended, he returned to New York, unemployed, nearly broke, and living at the YMCA on 125th Street.

It was there that he got the idea to teach public speaking, and he persuaded the "Y" manager to allow him to instruct a class in return for 80% of the net proceeds.

In his first session, he had run out of material; improvising, he suggested that students speak about "something that made them angry", and discovered that the technique made speakers unafraid to address a public audience.

From this 1912 debut, the Dale Carnegie Course evolved. Carnegie had tapped into the average American's desire to have more self-confidence, and by 1914, he was earning $500 - the equivalent of nearly $10,000 now - every week.

Perhaps one of Carnegie’s most successful marketing moves was to change the spelling of his last name from “Carnage” to Carnegie, at a time when Andrew Carnegie (unrelated) was a widely revered and recognized name.

By 1916, Dale was able to rent Carnegie Hall itself for a lecture to a packed house. Carnegie's first collection of his writings was Public Speaking: a Practical Course for Business Men (1926), later entitled Public Speaking and Influencing Men in Business (1932).

His crowning achievement, however, was when Simon & Schuster published How to Win Friends and Influence People.

The book was a bestseller from its debut in 1937, in its 17th printing within a few months. By the time of Carnegie's death, the book had sold five million copies in 31 languages, and there had been 450,000 graduates of his Dale Carnegie Institute.

It has been stated in the book that he had critiqued over 150,000 speeches in his participation of the adult education movement of the time. During World War I he served in the U.S. Army.

His first marriage ended in divorce in 1931. On November 5, 1944, in Tulsa, Oklahoma, he married Dorothy Price Vanderpool, who also had been divorced.

Vanderpool had two daughters; Rosemary, from her first marriage, and Donna Dale from their marriage together. Carnegie died at Forest Hills, New York, and was buried in the Belton, Cass County, Missouri cemetery.