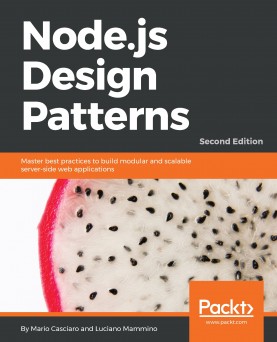 Node.js is a massively popular software platform that lets you use JavaScript to easily create scalable server-side applications. It allows you to create efficient code, enabling a more sustainable way of writing software made of only one language across the full stack, along with extreme levels of reusability, pragmatism, simplicity, and collaboration. Node.js is revolutionizing the web and the way people and companies create their software.

In this book, we will take you on a journey across various ideas and components, and the challenges you would commonly encounter while designing and developing software using the Node.js platform. You will also discover the "Node.js way" of dealing with design and coding decisions.

The book kicks off by exploring the basics of Node.js describing it's asynchronous single-threaded architecture and the main design patterns. It then shows you how to master the asynchronous control flow patterns,and the stream component and it culminates into a detailed list of Node.js implementations of the most common design patterns as well as some specific design patterns that are exclusive to the Node.js world.Lastly, it dives into more advanced concepts such as Universal Javascript, and scalability' and it's meant to conclude the journey by giving the reader all the necessary concepts to be able to build an enterprise grade application using Node.js.

Luciano Mammino is a software engineer born in 1987, the same year that the Nintendo released Super Mario Bros in Europe, which by chance is his favorite video-game. He started coding at the age of 12 using his father's old Intel 386, provided only with the DOS operating system and the qBasic interpreter.

After a master's degree in computer science he developed his programming skills mostly as a web developer working mainly as freelancer for companies and startups all around Italy. After a start-up parenthesis of 3 years as CTO and co-founder of Sbaam.com in Italy and in Ireland, he decided to relocate in Dublin to work as senior PHP engineer at Smartbox.

He loves developing open source libraries and working with frameworks such as Symfony and Express. He is convinced that the JavaScript fame is still at the very beginning and that this technology will have a huge impact in the future of most of the web-and mobile-related technologies. For this reason, he spends most of his free time improving his knowledge of JavaScript and playing with Node.js.