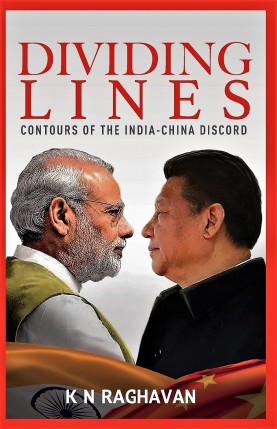 The chessboard of Sino-Indian relations, fraught with emotion, diplomatic strategy, military stand-offs and global ambitions, will perhaps be the most keenly watched during the 21st century; certain to send ripples across the world, influence markets and international policy. So where do the fault lines lie in this contest between the two Asian giants, poised on either side of the Himalayas?

India and China, inheritors of two of the world’s most ancient civilisations have had aeons of neighbourly bonds, cemented by Buddhism and the bridgebuilding missions of Fa Hien, Huen Tsang and Kotnis. No strife was witnessed till the fateful autumn of 1962, when the two countries fought a short and bitter war on the desolate Himalayan heights. Ever since, mutual suspicion, sporadic face-offs and a spirit of competitive nationalism have bedeviled relations between them, even as unsettled borders possess the ability to trigger
further conflict.

In a cogent and comprehensive analysis, the author traces the origins of the discord to the flawed legacy of imperial Britain’s unilateral border delineation and the ebb and flow of Chinese activism in Tibet. The gripping narrative carries the reader from the post-1947 Panchsheel bonhomie to years of mutual distrust, aggravated, among other causes, by Chinese paranoia over Tibet, and Indian public opinion. India’s cataclysmic defeat in the 1962 war, which remains a young nation’s humiliation, is attributed to the ill-advised Forward Policy and failure of the politico-military leadership of the time.

In this revised and updated edition, the author chronicles the events after the 1962 war and the changes in the relationship subsequent to the evolution of China into a economic and military superpower. The impact of China’s special relationship with Pakistan, their apprehensions about the Dalai Lama, the role of USA, and the recurring incidents at the border, including Doklam, are analysed lucidly as are the challenges faced by Indian military and diplomatic establishment in tackling the threat from across the Himalayas.

K N RAGHAVAN was born in Kochi, Kerala, where he had his schooling. Having completed an MBBS degree from Government Medical College, Kozhikode, he was doing post-graduate studies in Physical Medicine and Rehabilitation at Thiruvananthapuram when he decided to sit for the Public Services Examination and joined the Indian Revenue Service (Customs and Excise). In the course of his career, Raghavan has worked in places as varied as Hosur, Coimbatore, Kozhikode, Kochi, Mumbai and Singapore. He was Commissioner of Customs at Kochi from 2012 to 2017, and is presently Chief Executive Officer, Norka Roots, Thiruvananthapuram. Like most Indians, Raghavan is passionate about cricket. A BCCI accredited umpire, he has umpired One Day Internationals. He has also authored two other books - The World Cup Chronicle and Vanishing Shangri La: History of Tibet and Dalai Lamas in 20th Century. Married to an ENT surgeon; they have one daughter. Contacts: k_n_raghavan@yahoo.com / www.knraghavan.com