The world Erratica, jumped into Bachi Karkaria's head as she drove to work thinking of a name for a new column, which began in 1992 and is currently parked in the Sunday Times of India. It turned out to be an apt label, for the column became a weekly spin on a range of prevalent issues –

sometimes wicked, sometimes warm, always incisive. This is a collection of some of her best takes on life, people family, politics and media, making the book as fresh as tomorrow's headline, as timeless as the human condition 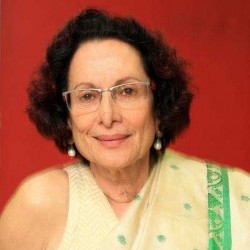 Bachi J. Karkaria graduated from Calcutta University with an Honors degree in English literature and later attended a course in advanced journalism at the Thompson Foundation, Cardiff, UK.

She began her career in journalism as a trainee with the Times of India Group, and, in 1980, became the first woman assistant editor of The Statesman.

In 1988, she rejoined the Times Group as senior editor of The Times of India and was given charge of Saturday Times and Sunday Review, in addition,

she writes a popular column on social mores as well as feature articles on civil aviation, urban issues, and public health (especially AIDS).

Bachi J. Karkaria has written a book on the life and times of Calcutta’s Grand Hotel and co-authored one on Mother Teresa. She is married and has two sons.