Home / Books / Death At My Doorstep

Death At My Doorstep

For Khushwant Singh who wrote his own obituary in his twenties, death is not sacred but he reflects on it increasingly these days. In Death At My Doorstep, a collection of obituaries written over the years, he presents the dead in death, as in life-good, bad or ugly.

Be it on the twilight hours of Bhutto, the gory end of Sanjay Gandhi, the Sycophantic M.O. Mathai, the Marxist millionaire Rajni Patel, the overbearing Lord Mountbatten, or on his pet Alsatian Simba, each obituary bears out his irreverence or affection. Cocking a shook at death, he has also penned his own epitaph.

Yet outliving those whom he admired has moved him to tears, and many of his obituaries have left the reader with a heavy heart. While Death At My Doorstep is Khushwant Singh's demystification of death, it also ferries his message to Bade Main, in the words of Allam Iqbal:

Bagh-e-banish say mushy hum-e-safari Diya the kaon? Kara-e-Johan daraf Hai, ab mere Intisar car. (why did you order me out of the garden of paradise? I have a lot of work that remains unfulfilled; now you better wait for me.) 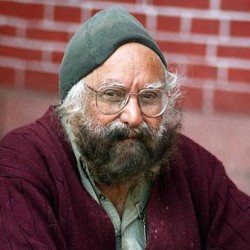