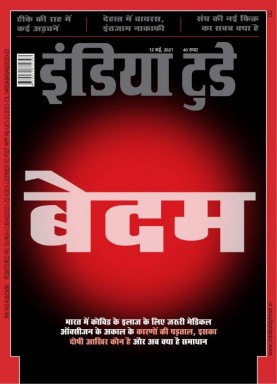 A lethal second wave and critical shortage in oxygen supply have crippled India’s fight against Covid. Why did India fail to foresee the crisis and what can it do to mitigate it?

The National Vaccination drive faces supply, distribution and pricing hurdles. Beginning May 1, the Great Indian Vaccine Rollout will now cover millions of people in the 18-44 age brackets across the country in the inoculation drive against Covid-19. It is lot more challenging than holding a general election.

Financial impact of lockdown on exchequer and common man is huge and this was experienced last year. Prime Minister Narendra Modi urged states to think of lockdowns as a means of last resort. Within a week, though, faced with a runaway spiral in Covid cases, Maharashtra, Delhi, Gujarat and Karnataka were forced to do just that, while other states had to impose night and weekend curfews.

Hardly a year left for the next assembly election, and Punjab chief minister Capt. Amarinder Singh can ill afford to be seen stranded alone in a political crisis. On April 10, the Punjab and Haryana High Court quashed the SIT report in a 2015 case on the desecration of the Guru Granth Sahib. Seen by many in the state as a travesty of the judicial process, the issue has snowballed into a political crisis for the chief minister.

Marking a major departure from its conservative liquor policy, the Rajasthan government, on April 1, issued a notification allowing bars in the state to operate microbreweries. The state’s excise department is its second-largest source of tax revenues and, after 15 years of stagnation, Chief Minister Ashok Gehlot has finally ushered in changes.

RJD supremo Lalu Prasad Yadav finally got bail and out of the jail. He is still relevant and important to Bihar Politics because he has capabilities to reach out even the enemy politicians. What are the possible outcomes of his coming out of jail?

Shortage of bed, oxygen cylinder, ICU bed, Ventilators etc. can be fixed by use of technology just like e-commerce companies and different aggregators using. But, government missed the chance and public facing many problems.

The Camel Act was meant to save Rajasthan’s state animal. Instead, it has led to dwindling numbers and despairing herders. Can the Gehlot government save the camel?