Home / Books / Twenties Girl - She's Having The Time Of Her Life

Twenties Girl - She's Having The Time Of Her Life

Available
The fabulous new novel from this number one bestselling author. Lara has always had an overactive imagination. Now she wonders if she is losing her mind. Normal twenty-something girls just donâ€™t get visited by ghosts! But inexplicably, the spirit of Laraâ€™s great aunt Sadie â€“ in the form of a bold, demanding Charleston-dancing girl â€“ has appeared to make one last request: Lara must track down a missing necklace Sadie simply canâ€™t rest without.nnLaraâ€™s got enough problems of her own. Her start-up company is floundering, her best friend and business partner has run off to Goa, and sheâ€™s just been dumped by the love of her life.nnBut as Lara spends time with Sadie, life becomes more glamorous and their treasure hunt turns into something intriguing and romantic. Could Sadieâ€™s ghost be the answer to Laraâ€™s problems and can two girls from different times end up learning something special from each other 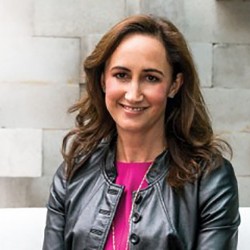 Sophie Kinsella has sold over 40 million copies of her books in more than 60 countries, and she has been translated into over 40 languages.

Sophie Kinsella first hit the UK bestseller lists in September 2000 with her first novel in the Shopaholic series – The Secret Dreamworld of a Shopaholic (also published as Confessions of a Shopaholic).

The book’s heroine, Becky Bloom wood – a fun and feisty financial journalist who loves shopping but is hopeless with money – captured the hearts of readers worldwide.

Becky Bloom wood came to the big screen in 2009 with the hit Disney movie Confessions of a Shopaholic, starring Isla Fisher and Hugh Dancy.

Sophie has also written seven standalone novels which have all been bestsellers in the UK, USA and other countries around the world:

Can You Keep A Secret?, The Domestic Goddess, Remember Me?, Twenties Girl, I’ve Got Your Number, Wedding Night, and My Not So Perfect Life, which was a Goodreads Choice Awards finalist for Best Fiction in 2017.

In 2014 she published a Young Adult novel Finding Audrey about a teenage girl with social anxiety and her madcap family, and in January 2018,

Sophie published her first illustrated book for young readers about the charming adventures of a mother-daughter fairy duo, Mummy Fairy and Me (also published as Fairy Mom and Me).

Sophie’s latest novel, Surprise Me, published in February 2018, presents a humorous yet moving portrait of a marriage—its intricacies, comforts, and complications.

Surprise Me reveals that hidden layers in a close relationship are often yet to be discovered.

Sophie wrote her first novel under her real name, Madeleine Wickham, at the tender age of 24, whilst she was working as a financial journalist.

The Tennis Party was immediately hailed as a success by critics and the public alike and became a top ten bestseller.

She went on to publish six more novels as Madeleine Wickham: A Desirable Residence, Swimming Pool Sunday, The Gatecrasher, The Wedding Girl, Cocktails for Three and Sleeping Arrangements Sophie was born in London.

She studied music at New College, Oxford, but after a year switched to Politics, Philosophy and Economics. She now lives in London, UK, with her husband and family.