Nikhil Arya has fallen. Once, he was an Ivy League scholar with a promising future at NASA; now, at forty, he is broke, homeless, and minutes away from blowing his brains out in a diabolical modern-day joust. It wasn't meant to be this way.

An innocent vacation turned into an epic intercontinental journey that saw Nikhil become first a genocide survivor, then a Buddhist monk, a drug lord, a homeless accountant, a software mogul and a deadly game fighter. Now, twenty years later, Nikhil aka Johnny is tired of running. With the Colombian mafia on his trail and his abandoned wife and son ten thousand miles away,

he prepares for his final act, aware that he will have lost even if he wins. Or will he? Is there any greater victory than living a life that knows no limits, a world that has seen no boundaries? From the bestselling author of Keep Off the Grass comes the once-in-a-

lifetime story of an ordinary man fighting an extraordinary destiny. Can he pick up the pieces one last time or will Nikhil, now Johnny, go down for good? 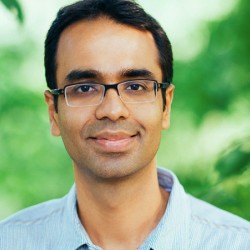 Both novels were optioned into films, the latter just entering pre-production and slotted for a 2017 international release.

He was selected as one of the “Top 35 Under 35 Indian” by India Today and was nominated for all of India’s top literary awards—the Crossword Book of the Year, India plaza Golden Quill and Teacher’s Indian Achievers Awards(Arts).

THE YOGA OF MAX'S DISCONTENT, Karan's first international novel, will be published by Penguin Random House on May 3rd 2016.

It was inspired by Karan’s one year spiritual sabbatical learning Yoga in a South Indian Ashram, meditating in complete silence in the Vedantic tradition in the Indian Himalayas and living as a Buddhist Monk in a Scottish monastery.

Now back in New York, Karan is a certified Yoga teacher attached to the Sivananda Yoga Vedanta Center while working his day job as the Chief Marketing Officer of the cult mom brand, Aden and Anais.

Born in 1979 into an Army family, Karan is an engineering graduate from BIT Ranchi and an MBA from the Indian Institute of Management, Bangalore.

He can be reached at: