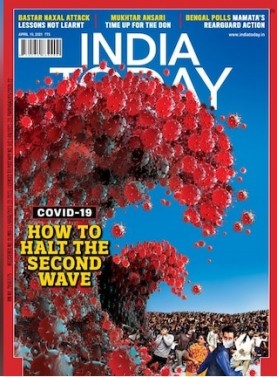 In the first week of March, with the daily cases of Covid-19 reduced to a trickle, officialdom was busy patting itself on the back for having conquered the virus, unlike many advanced countries. The euphoria did not last long. In just 24 hours on April 6, India crossed 115,312 infections, the largest number of daily cases after the United States and the highest since the pandemic began. On April 2, we recorded 713 deaths, our highest number of deaths in a single day. A little over a year after India imposed the world’s harshest lockdown to break the rising wave of infections, we seem to be back to square one.

Hospitals are rapidly filling up and major metros have declared night curfews. In fact, what we are seeing is everything short of a complete lockdown. The 871-point dip in the stock market on April 5, even as cases surged, is a warning of how a Covid resurgence could threaten our economic recovery. For a country that believed Covid-19 was a nightmare we had put behind us, this is a hard place to be in.

How did we get here?

The biggest culprit, it can now be said, is our own complacency. When the number of daily infections began dipping, Indians shed caution, social distancing, hand hygiene and masks. Other factors played a part too. Government health agencies that should have been tracking the virus and treating patients let their guard down. Even when the vaccine came, we did not move swiftly to inoculate the maximum number of people.

Even though India has vaccinated over 75 million people with one dose, the top five states with high active caseloads are yet to vaccinate even 15 per cent of their population. Nationally, the figure is even lower, at 6 per cent. In contrast, Israel has administered at least one dose to 59 per cent of its population, Bhutan 62 per cent, the UK 47 per cent and the US 32 per cent.India has had a major vaccine success story in eradicating smallpox, a virus with a case fatality rate of one in four persons, far deadlier than Covid.

In just a year between 1974 and 1975, the country went from having over 80 per cent of the world’s smallpox cases to completely eradicating it. As India Today reported in its June 15, 1977 issue, the Indian campaign was a massive effort that involved in the final phase over 152,000 field workers fanning out across the country to vaccinate people.

The irony is that a country that has conducted one of the world’s most successful vaccination programmes against smallpox and polio, and happens to have the world’s largest vaccine manufacturing facility, is now struggling to immunise its population. We are also a country that seamlessly and efficiently conducts the world’s largest elections, a mammoth task of planning, coordination and physically moving tens of thousands of people. Yet, we have failed to apply these lessons to our vaccination programme. This is, of course, the first time that a vaccine has arrived in the midst of a pandemic, but clearly, not enough thought seems to have gone into giving the doses urgently to halt the second wave.

The task of administering vaccinations was at first restricted to the public sector before the private sector was roped in. It took us about a month to go from healthcare and frontline workers to those above 65 and those with co-morbid conditions. We adopted a policy of stratifying the vaccine administration even when there were sufficient stocks of the vaccine. Instead, India exported 60 million vaccine doses, only marginally less than the 70 million doses it used to vaccinate its own people. Vaccine diplomacy has its merits but surely not at the cost of one’s own citizens.

The virus is now upon us. Worse, this second wave has been triggered by four different strains of the original China variant that caused the first wave in 2020. There is only a very thin silver lining to the second wave and that is the fact that like last year our case fatality ratio remains the lowest in the world. The virus is changing its behaviour and becoming more infectious, but it is not becoming deadlier. Fortunately, we are also not as badly prepared this time as we were last year.

The system can now gear up very rapidly to handle the surge, but we need to rethink our strategy and marshal the state’s resources to speed up vaccinations. Experts say we need to focus on increasing vaccine supply as well as expand vaccine eligibility. In fact, virologist Gagandeep Kang invokes the election analogy to suggest the setting up of polling booth-like vaccine stations, especially in states witnessing serious surges. The government needs to address the grave issue of vaccine hesitancy and defeat misinformation and false propaganda around the vaccination campaign. She also believes the second wave is at the national level, some places are seeing a third or fourth wave.

With the rise of the new variants, what India needs the most right now is an effective strain surveillance system and data analysis. We also need studies to understand the impact of Covid’s mutant strains, how infectious they are, the mortality, infection, and re-infection rates. Currently, India has only limited information on the total number of variant infections, the total number of reinfections or the infections post-vaccination. There is a dire need for data at all levels to make informed decisions to halt Covid transmission.

Associate Editor Sonali Acharjee, who has tracked the pandemic over the past year and has written 17 cover stories and over 50 articles on the subject, has put together our cover story this week, ‘Covid-19: How to Halt the Second Wave’. She spoke to health experts to analyse the reasons behind the resurgence and dissect the Centre’s new five-fold strategy to deal with the second wave.Clearly, Covid-19 will be around for some time. It is a deadly race between the transmission of the virus and the pace of our vaccination. Prevention, as they say, is better than cure. Complacency, on the other hand, is a recipe for disaster.