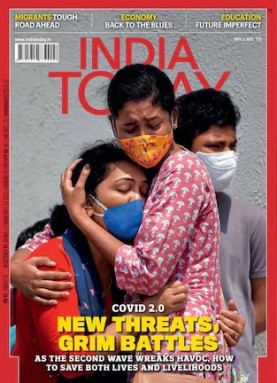 Our nation is at war,” General V.P. Malik tweeted on April 18. As the last Indian army chief to have led troops in war, he should know. Each day, over 2,000 Indians are succumbing to Covid-19, nearly four times the number of soldiers killed in the 11-week Kargil War in 1999. But there’s an important difference, this pandemic is not a distant border conflict fought by generals and professional soldiers. The tsunami of the second wave has crashed into our towns and cities, affecting our friends, neighbours and relatives, overwhelming our health infrastructure, leaving people scrambling around for hospital beds, oxygen cylinders and even slots in crematoriums to dispose of the dead.

Over 200,000 persons have been infected every single day since April 15, the world’s largest number of new cases since the start of the pandemic last year. Ten sta­tes, Delhi, Maharashtra, Karnataka, Kerala, Tamil Nadu, Andhra Pradesh, Uttar Pradesh, Chhattisgarh, West Bengal and Rajasthan, account for 80 per cent of India’s 15 milli­on cases. The second wave may have the same death rate of 1 per cent as the first one, but it is far more infectious, barrelling through the country at an astonishing rate.

Active cases are doubling every 10 days. The national test positivity rate has been an average 13.5 per cent this week and shooting up to 20 per cent on April 19 (the WHO recommends it be kept below 5 per cent to avoid drastic surges like the present one). The positivity rate in some states is 30 per cent, which means one out of three persons tested is positive. India is now the world’s second most affected country after the US, which could worsen. The government has woken up to this fact, which is why it has opened up vaccination to those over 18.

Prime Minister Narendra Modi, who addressed the nation on April 20, ruled out the possibility of a nationwide lockdown. The 68-day lockdown India imposed last March when experts were still grappling with the virus and building capacities did the economy serious harm. This time around, asserting that the economy’s health was as important as the nation’s, the prime minister made a case for micro-containment zones and self-discipline to break the chain of Covid transmission.

After blundering around for weeks, hurling accusations and counteraccusations, dragging its feet on foreign vaccine approvals and rolling out a stratified vaccine programme, the government denied any shortage of medicines or vaccines. It has relaxed the over-regulation and brought in the private sector. This was a welcome change, no doubt, but new cases on that day had already climbed to 290,000 and the test positivity rate to 17 per cent.

States are already following their own strategies. Delhi, the second most affected state, has imposed a week-long lock­down. Maharashtra and UP are contemplating similar measures. There is still no clarity on how long the second wave will last. But one thing is certain. We are up against an unseen, fast-mutating adversary, which, if left unchecked, could cause a nationwide breakdown. In short, we are facing a total war of the kind witnessed during the Spanish Flu of 1918. Just as wars are not fought by armies alone but by nations that bring to bear all the state resources, this battle too cannot be fought by individuals or states in isolation.

It needs a centrally coordinated approach and a pooling of all national resources.There are steps governments and states need to take on a war footing. First, we need to fortify our testing facilities. In most cities, test results are taking four days from the earlier six hours. If we don’t test enough people swiftly, we won’t know the extent of the spread and contain it through timely isolation of the infected. Next, we need to ramp up facilities in cities that are currently being overwhelmed by massively expanding hospital infrastructure and bringing in beds with ICU equipment and trained staff.

In the first wave, 80 per cent of the cases were asymptomatic, 20 per cent required hospitalisation, of which 5 per cent needed ICU and 1 per cent ventilator care. This holds true even in the second wave, except that the absolute numbers are much more. We need to pay serious heed to genome tracking of this invisible, fast-moving foe. Genome sequencing, the study of the genetic structure of pathogens, is an early warning system. It enables us to study where and how the virus travels. It can help us avoid a repeat of the deathly calm between the two waves when the government turned a deaf ear to warnings from health experts that the virus was mutating.

As one health expert told us, it was because we failed to keep track of the clinical symptoms new mutations were exhibiting that we could not prepare for challenges like the increased demand for oxygen. We also urgently need to ramp up vaccine production and administer doses to all citizens at the earliest to prevent rolling waves of infection. This isn’t rocket science, the cost of a sick country is far greater than the cost of a few billion vaccine doses.

The pandemic has spread panic. It is evident in frightened people hoarding life-saving medicines, injections and oxygen cylinders and in the flood of migrants heading back to their homes like they did last year. The government needs to amplify its communication strategy, set up 24x7 emergency control rooms and restore the people’s faith in its ability to deliver. If it can be done to manage election war rooms and run nationwide political campaigns, it can surely be done to fight the panic.

It would truly be a shame if Digital India, a country with the world’s second-largest number of smartphone users, and Aadhaar, touted as the world’s most sophisticated ID programme, cannot bring succour to people in their hour of need.Our cover story, ‘New Threats, Grim Battles’, put together by Associate Editor Sonali Acharjee with reports from bureaus across the country, documents the magnitude of Covid’s second wave and the strategies for combat. This clearly is a battle to be fought and won, and its lessons cast in stone and forcefully implemented. Like in a battle, it needs a flexible strategy that can adapt itself to changing facts.

As former US defense secretary Donald Rumsfeld, who was part of America’s war on terror, said, “There are known knowns...known unknowns...and unknown unknowns, the ones we don’t know we don’t know....” With the pandemic continuing to rage despite research on the new mutants, effective medicines or vaccine efficacy, we are sadly swimming in an ocean of Unknown Unknowns. The solutions are constant vigilance, staying abreast of Covid discoveries, evolving strategies, being united and delegating to community levels. We are a country that has seen enough calamities. We will get past this one too.