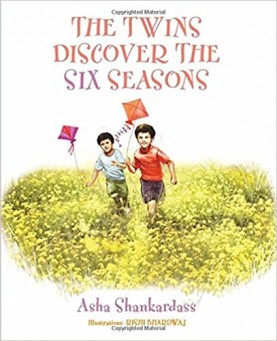 The Twins Discover the Six Seasons: 1

Town-bred and much-travelled, ten-year-old twins, Sharat and Shishir, are most unhappy when they are sent to their grandparent's home in their ancestral village while their parents are away in Africa for a year. Nor do they think much of their young cousin, Varsha. But, in spite of Varsha's needling and several adventures along the way, they gradually settle down in the village with its beautiful surroundings and in their new school ? all under the loving care of their grandparents, uncle and aunt. As they watch the seasons change, they are astonished to learn that India has six seasons (ritus). With joy and wonder they discover each season along with their unique links to music, art, poetry, food and fun-filled festivals. As the days and months change, so too, do the boys. The once-dreaded year away is over all too soon

The Indo-Gangetic Plain is a vast stretch of land with great rivers such as the Ganges and Yamuna flowing through it. Every turn of its course is imbued with history, culture, festivals and legends. Here are some of India's most ancient cities such as Benaras, Allahabad, Lucknow, Patna and Bodh Gaya ? each with their own tales to tell!

This is also the part of India where great figures such as the Buddha, Emperor Ashoka, Tulsidas, Kabir and Pandit Jawaharlal Nehru, left their mark on prosterity. Childhood memories remain vivid. I spent my early life in Lucknow, where my father was posted. The stories told by my parents while I was growing up, about this colourful cityof nawabs, has remained in my mind and I have woven them into the fabric of Champa's story. Later in life, I got involved in Vipassana ? a particular technique of meditation.

It is said that this was the form of meditation that the Buddha himself practiced. I had the good fortune to travel to the ïland of the Buddha', which extends over Uttar Pradesh, Bihar and a part of Nepal, with my meditation group. It was a greatly enriching experience. I have used all these places, through Champa's travels, to tell the tale of the Buddha and other stories of this region, for my young readers.