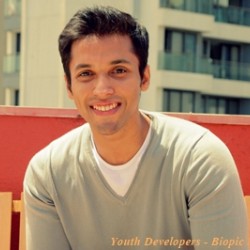 Durjoy Datta was born in New Delhi, and completed a degree in engineering and business management before embarking on a writing career. His first book-Of Course I Love You . . .-was published when he was twenty-one years old and was an instant bestseller. His successive novels-Now That You're Rich . . .; She Broke Up, I Didn't! . . .; Oh Yes, I'm Single! . . .; You Were My Crush . . .; If It's Not Forever . . .; Till the Last Breath . . .; Someone Like You; Hold My Hand; When Only Love Remains; World's Best Boyfriend; The Girl of My Dreams; The Boy Who Loved; The Boy with the Broken Heart and The Perfect Us-have also found prominence on various bestseller lists, making him one of the highest-selling authors in India.

Durjoy also has to his credit nine television shows and has written over a thousand episodes for television. He lives in Mumbai. For more updates, you can follow him on Facebook (www.facebook.com/durjoydatta1) or Twitter (@durjoydatta) or mail him at durjoydatta@gmail.com.

YouthKiAwaaz.com’s Shivangi Singh got a chance to interview best selling author Durjoy Datta – the author who writes contemporary Indian romance fiction. According to AC-Nielson bookscan, he was the third highest selling Indian author in India. He owns a publishing house called Grapevine India along with fellow author Sachin Garg. In total he has written six bestsellers. He has been named as a young achiever by The Times of India in 2009. He was also chosen as one of the two young achievers in the field of Media and Communications by Whistling Woods International in 2011.

What inspired you to start writing while still in college
I had been blogging for a really long time and — as bloggers are — used to get favorable reviews from them. I had quite a lot of time in the last year of Engineering so I decided I should sit down and string all the blog posts together in the form a book. What came out as a result was “Of Course I Love You!”.

What all struggles and difficulties did you have to face prior to your first publication?
Since I didn’t have any ambitions to be a writer, I wasn’t driven to get it published from a big, behemoth of a publishing house. Mindlessly, I had shot across the manuscript to every e-mail ID I could scourge and it got accepted within a week. So, luckily, I didn’t have to struggle a lot during the process.

In today’s scenario, how easy or tough is it for a young amateur write to get published? What tips would you give to someone who wants to get published?
I think the scenario is much better from when I started to write. There are publishers who take young authors seriously. But that’s also the pitfall. Just because it’s easier to get accepted and published now, the drive to get better as a writer wanes away. I say this from personal experience because I don’t think I grew at all during the first three years as a writer. If anything, I got worse.
For people looking to get published, my tip would be to move on. A lot of people have a strong emotional attachment to their first book — understandably — and they just drop writing till it gets published. That’s a major pitfall because you are losing that time to learn.

Today you are amongst the top-read authors in India. How does it feel? Does it get a bit too taxing at times (in terms of maintaining a work-life balance like the other MBA students in your batch)?
I graduated in 2011 from MDI, Gurgaon. And I never found writing taxing, since I always wrote when I was stressed out. Writing was a way I could run away from everything. It was like spending a day in a spa after a long week. So, if anything writing was how I maintained a work-life balance!

We find myriad of books written by Indian authors within the same price range and with a similar theme. What do you have to say for this?
See, you have to understand that it’s very easy to write about one’s life and what happens around us. I did that for a major part of my writing career up till now. But having said that I think eventually readers could grow weary of the same themes. I think all of us — writers including me — have to look at different themes and reinvent ourselves continuously.

With great friends come loyal foes. What do you have to say to your critics?
I think they have the right to say whatever they think. There are writers who are better than me who look at me and say, ‘What gibberish!’, just like I look at some and say, ‘What garbage!’ It’s how it is. No one can help that. I take criticism very seriously and it helps me a lot. The only criticism that I take seriously is when someone says, ‘Stop writing.’ Other than that, everything else is welcome.

What projects have you undertaken currently? Any new novel on the way?
My next book, “Till The Last Breath . . .” is slated for a September 2012 release.

Why have you used pen names in a few of your co-authored recent releases?
I have written the two books of The Backbencher series under the ghostname “Sidharth Oberoi” because it’s different genre of books. It’s set in school and aimed at a younger audience. It’s a little different from the books I write. Also, this is a project where we want other authors to write under this pen-name so that the series can continue. I co-wrote the first two ones to give the series a flavor and to put the idea across of what a Backbencher series book should be like.

By the time you finished engineering you were an established author then why did you feel the need to follow it up with an MBA degree?
I never had ambitions to write for a living and I still don’t. It’s something that I do because I like to do it. I might feel worn out after a few years. I will have to stop writing then. Getting a management degree was always a part of the bigger picture. A part of me still wants to be in a corporate set up; wearing sharp suits and get driven around in office cars.

You started your own publishing house. What prompted you take such a decision and how has the ride been thus far?
There were a multitude of reasons to do that. Firstly, there was a huge gap in the market which we wanted to fill. There was a glaring lack of support from authors from publishing houses. It wasn’t anyone’s fault because all the major publishing houses have hundreds of books to take care of. We wanted to limit our publishing list and concentrate on the authors we wanted to publish. That’s why we called ourselves a community of authors because we wanted to bridge the gap and put the author at the top of the publishing food chain.

What are your hopes for the future? Where do you see yourself as an author and as an individual in the next five years?
Hopefully I will grow as an author. I am terrible by my own standards and wallow in self-pity almost all the time. I think I have gazillion miles to go before I write a book I can be proud of.
As an individual, I will just try to do what I like to do and have fun doing it!

This one for aspiring authors: How can one be a part of Grapevine as an author? What judging criteria do you set for authors?
One has to mail three sample chapters, synopsis and a short author’s bio at contact@grapevineindia.in. We will try to respond as soon as possible.Â The first criterion is the language which is make or break for us. Beyond that it’s usually a very subjective call.