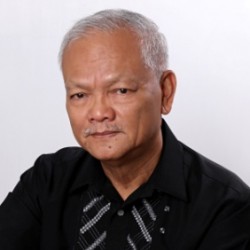 Belo, whose full name is Isabelo S. Alvaran, is a retired employee of the Philippine Department of Foreign Affairs. He had served, inter alia, as secretary and rapporteur to the National Committee on Illegal Entrants (NCIE) chaired by the Secretary of Foreign Affairs, the task that gave him understanding on the role of Moses.

He also liaised with the ASEAN Secretariat in Manila and saw firsthand the forging of international agreements which gave him many insights on the making and nature of God’s Covenants. He had been assigned to the State of Israel as Political Reporter which provided him good perspective on the Jewish way of life.

Belo’s ardent quest for the meaning of life led him into an in-depth study of sacred and secular writings spanning 20 years. In his GOD’S COVENANT – EXTINCT OR EXTANT, he presented incontrovertible proofs that men and women of all colors are part of God’s Two-Phased Plan and advises readers to give attention to God's calling that is well expounded in this book.

At age 72, Belo is now blinded in the one eye but despite his disability, he wrote this book to present it as an offering to our great God and Father, and as token of his love for all people who seek the one and true God.