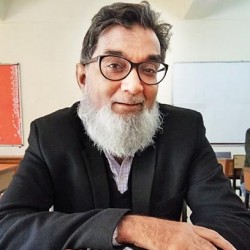 Ziya Us Salam is a noted literary and social commentator. A student of history from the University of Delhi, he is engaged in building bridges of commonality between communities through recourse to the Quran and the Vedas.

He has been associated with The Hindu for almost two decades and has been its Features Editor for North India editions for 16 years. At present, he is an Associate Editor, Frontline, and writes on sociocultural issues for the magazine besides doing book reviews.

A prolific and an acclaimed author, in 2019, he published Lynch Files, a take on victims of hate violence, and 365 Tales from Islam, a book that aims to introduce Islam to children. In the previous year, he had released Of Saffron Flags and Skull Caps, a take on the challenges to the idea of India, and Till Talaq Do Us Part, a study of various divorce options available in Islam. His book Delhi 4 Shows, a study of cinemas since the talkie era began, was released in 2016. His book Women in Masjid: A Quest for Justice was released recently.

Ziya was a jury member of the International Film Festival of India (non-feature film, 2011), Best Writing on Cinema (2008) and Vatavaran.

All Ziya Us Salam's Books