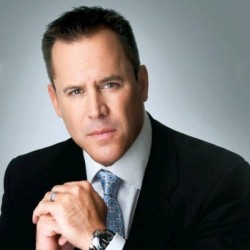 The fifth of seven children, Vince Flynn was born in St. Paul, Minnesota, in 1966. He graduated from the St. Thomas Academy in 1984, and the University of St. Thomas with a degree in economics in 1988.

After college he went to work for Kraft General Foods where he was an account and sales marketing specialist. In 1990 he left Kraft to accept an aviation candidate slot with the United States Marine Corps.

One week before leaving for Officers Candidate School, he was medically disqualified from the Marine Aviation Program, due to several concussions and convulsive seizures he suffered growing up.

While trying to obtain a medical waiver for his condition, he started thinking about writing a book. This was a very unusual choice for Flynn since he had been diagnosed with dyslexia in grade school and had struggled with reading and writing all his life.

Having been stymied by the Marine Corps, Flynn returned to the nine-to-five grind and took a job with United Properties, a commercial real estate company in the Twin Cities.

During his spare time he worked on an idea he had for a book. After two years with United Properties he decided to take a big gamble.

He quit his job, moved to Colorado, and began working full time on what would eventually become Term Limits.

Like many struggling artists before him, he bartended at night and wrote during the day. Five years and more than sixty rejection letters later he took the unusual step of self-publishing his first novel.

The book went to number one in the Twin Cities, and within a week had a new agent and two-book deal with Pocket Books, a Simon & Schuster imprint. Vince Flynn passed away on June 19, 2013 after a three year battle with prostate cancer.