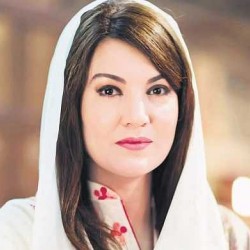 Born in the 1970s to an educated, affluent family of Pakistani origin in Libya, Reham Khan has led an eventful, dramatic life. While she was still an adolescent, her family decided to move back to Pakistan. At the age of nineteen, she married and relocated to the UK.

There, after walking out of an abusive marriage with three children, she started her career in journalism in 2006, going on to join the BBC in 2008. In 2013, Reham Khan returned to Pakistan and continued her journalistic and activist careers. By 2015, The Reham Khan Show had made its debut on Dawn News. She is also the producer of the Pakistani film, Janaan.

Reham Khan currently lives between Pakistan and the UK, fulfilling her role as a mother to her children while balancing one of the biggest, most prolific careers in British and Pakistani media.