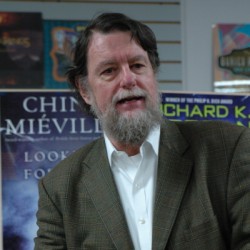 This Interview has been provided by Orbit, and is printed with their permission.

Robert Jordan is the bestselling author of the Wheel of Time series. WINTER’S HEART, the ninth book in the series, is out this month and contains a breadth of scope and depth of character rarely matched. Before he embarks on his US tour, we caught up with him to ask some of the questions the fans have been asking us.

How did you begin writing?

From the age of five I intended to write, one day. When I had established myself in a more stable profession. Then I had an accident that resulted in a month’s stay in the hospital, during which I almost died, and I decided life was too short to wait on ‘one day’. So I started writing.

What attracted you to writing fantasy?

I think that, in large part, I was led to fantasy because in fantasy it is possible to talk about right and wrong, good and evil, with a straight face. In so much else of literature, everything has begun to be rendered in shades of gray. It isn’t that I don’t believe there are gray areas, morally and ethically, but not everything is murky.

What differences do you think there are between writing mainstream and fantasy fiction?

None, really. In truth, given the appearance in more and more mainstream literature of ghosts, telepathy, the past impinging on the present, and other things that should be called fantasy, there is much less difference than, say, fifty years ago.

What started you down the road that led to writing THE EYE OF THE WORLD?

A number of idle speculations that percolated around in the back of my head. I thought about what it really would be like – really – to be tapped on the shoulder and told that you had been born to save humanity.

Even if the danger was real and imminent and everyone knew that someone was…scheduled, you might say…to show up and take care of matters, how would they react when that someone stood up and said here I am? I was thinking about the distortion of information over distance, whether distance in space or in time, and how that applied to both history and legends.

The further you are from an event, the less likely you are to know what really happened. I was thinking about what the world would be like if there had never been any need for a struggle for women’s rights, or if that struggle had taken place so long ago that it just wasn’t relevant any longer. No one thinks it’s odd to see women as high ranking politicians, or working on the docks.

No one ever thinks that something is or isn’t a suitable job for a woman. There were fifty or more lines of thought, and suddenly I saw, in rough form, what turned out to be the final scene of the last book of the Wheel. When I realized that that was what it was, a conclusion, all I had to do was figure out where to start from and how to get from A to Z.

How do you keep track of all the storylines and characters that you have woven into the series? Do you have a system of reference or is it all stored in your head?

The storylines are all in my head, except that when I begin a book I do sit down at the computer and ramble about a bit to figure out exactly how I intend to fit various things together. For the characters – and the cultures, nations, organizations and a great deal else – I have files on my computer. For example, there are two files on As Seda.

One has things like the history of the White Tower, its laws and rules, the customs and group attitudes of As Seda as a whole and among the different Amahs, details of organization for the various Amahs, how the Hall of the Tower works and how Sitters are chosen in the different Amahs, how women come to enter the Tower, how they are trained…. In fact, just about everything I can think of that might be useful to know about the White Tower.

The other As Seda file lists every sister, Accepted and novice who has been mentioned in the books, along with ‘civilian’ personnel of the Tower, and gives both every piece of information about those people that has been in the books and information that has not yet been used.

And might not. In part, I put it all together to round out the individuals, give them flesh. I am very glad to have an LS120 drive on my computer, because each of those files is now two large for the smaller 1.44 floppy.

A number of fans have asked us why Mat did not appear in THE PATH OF DAGGERS. Was this a conscious decision to delay his story until a more dramatic moment?

The man had a building fall on top of him. A building! Frankly, I didn’t think Mat lying in bed in splints and bandages was very interesting.

With so many plot strands now running through The Wheel of Time, will all of them be resolved at the very end or will there be some surprising conclusions earlier on?

One thing that has irritated me with some books is that, come the end, all of the characters’ problems are solved, all of the world’s problems are solved, and you might well sit the whole place on a shelf and put a bell-jar over it to keep the dust off. When I finish the Wheel of Time, I hope to leave the reader feeling that this world is still chugging along out there somewhere, still alive and kicking.

Do you know how many books there will finally be in The Wheel of Time?

Sigh. At least three more. If I can reach the final scene in three more books, I will. Believe me, I will. But I’m not making promises on that. In the beginning, I really thought I could wrap up this story in about five books. Then I thought it would be seven or eight. Then…. All I can say is, I will finish it as quickly as I can, using not one word more than I must.

Of the nine books published so far, which one has your favorite cover?

THE EYE OF THE WORLD.

If you had to describe the series in 6 words, what would they be?

Sheesh! I’ve written a few million words so far, and you want me to summarize in six? Well, here goes. Cultures clash, worlds change; cope. I know; only five. But I hate to be wordy.

Could you give us a little teaser of what is in store in WINTER’S HEART?

Do you have any plans for what you might do after you finish the series? Will you take a break or dive straight into something new?

I’ll take a very short break, just to relax a bit. At least, I intend to take a short break. It is very hard for me not to write. But I’ve been thinking about what I want to write next for about six years. Fantasy, but in a different world, with different cultures and customs.

My editor, who I’ve told a little bit about what I’m thinking, believes it will be a chance for people to see inside the Sencha empire in detail, though the place she is talking about isn’t Sencha or, as I said, anywhere at all in the world of The Wheel of Time.

It will be about the clash of cultures, of course. And the clash between men and women. By the time I finish with The Wheel of time, I should be about ready to start putting something on paper. I like to let these things swirl around in my head for a long time, first.

What do you have planned for Christmas?

A few house guests, some family and some friends. Gifts under the tree, a fire in the fireplace, and as many people at table for Christmas dinner as we can accommodate. Too much food, a little too much wine, and a lot of sitting with my feet up.

Copyright© 2002 Orbit. All rights reserved. No part of this may be reproduced or reprinted without permission in writing from the publisher. The interview has been provided by Orbit and is printed with their permission.