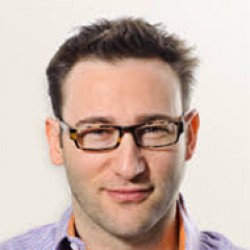 Simon Sinek is an optimist. He believes in a bright future and our ability to build it together.

Described as “a visionary thinker with a rare intellect,” Sinek teaches leaders and organizations how to inspire people. With a bold goal to help build a world in which the vast majority of people go home everyday feeling fulfilled by their work, Sinek is leading a movement to inspire people to do the things that inspire them.

Sinek’s unconventional and innovative views on business and leadership have attracted international attention and have earned him invitations to meet with an array of leaders and organizations, including: Microsoft, MARS, SAP, Intel, 3M, the United States Military, members of the United States Congress, multiple government agencies and entrepreneurs. Sinek has also had the honor of presenting his ideas to the Ambassadors of Bahrain and Iraq, at the United Nations and to the senior leadership of the United States Air Force.

Sinek is an adjunct staff member of the RAND Corporation, one of the most highly regarded think tanks in the world. He is also active in the arts and not-for-profit world, working with Education for Employment Foundation to help create opportunities for young men and women in the Middle East region. When not in hotels, he lives in New York, where he teaches graduate level strategic communications at Columbia University.

An Interview with Simon Sinek, Author of "The Infinite Game"

Too many companies think they're playing a finite game. But you can't "win" business, and approaching it like you can could open you up to failure, according to author and organizational consultant Simon Sinek.

In his new book The Infinite Game, Sinek offers a framework for individuals, groups, and organizations to shift their thinking and practices to play an infinite game. He recently sat down with the Brew to discuss.

Who is this book for?

It's for anyone who cares about being a better version of themselves. Who feels uncomfortable about the way our leaders are leading, or thinks there's a better way to do things. It's for all those people who've had that uncomfortable feeling when they go to work, this can't be it.

When have you had that feeling in your own life?

I get it all the time—even my work now. I'm constantly accused of being an idealist or not understanding how business works. When I discovered James Carse's work on infinite games, it made me realize all these people telling me I don't get it...they don't get it.

Carse offered a perspective, but no instructions. And the more I started to try and embrace his infinite mindset for myself, I realized there were patterns and steps that could be taken.

Let's start there: What is an infinite game?

According to James Carse, there are two kinds of games. Finite games, which have known players, fixed rules, agreed upon objectives, and a beginning, middle, and end—like a sporting game. The purpose is to win. Infinite games have known and unknown players (very often new players join). The rules are changeable, and there's no finish line.

If you think about it, business isn't a finite game. There's no such thing as "winning business." No one's declared the winner of business. But so many people talk about being No. 1, being the best, beating their competition. Too many people are playing business with a finite mindset. It has very predictable and consistent outcomes: a decline of trust and motivation.

Can you have finite and infinite games within each other?

You write that every organization playing an infinite game needs a "Just Cause," which you define as for something, inclusive, service-oriented, resilient, and idealistic. Take Sweetgreen, whose Just Cause isn't "making the best salad," but "to inspire healthier communities by connecting people to real food."

How do you stop a Just Cause from overreaching, like WeWork's mission to "elevate the world's consciousness"?

I don't think you can take a Just Cause too far. The question is, are you building a Just Cause legitimately. With WeWork, were they actually trying to bring happiness to everyone's work, or did they see it as a personal enrichment vehicle?

Everyone in Silicon Valley wants to "change the world." That to me is amorphous, which is not a Just Cause. A Just Cause is a specific vision of the world that we hope to advance. It's a lot more descriptive than "make an impact."

A well articulated Just Cause that doesn't actually take steps to advance is just marketing. There's a lot of companies that say the right thing, but that's just smoke and mirrors.

You criticize shareholder primacy in your book. What did you think of the recent Business Roundtable update on the purpose of a corporation?

The mere fact that these CEOs and companies were willing to sign onto a statement like that is proof this movement—rejecting the finite thinking of [economist] Milton Friedman, [former GE CEO] Jack Welch, and their disciples—is moving in the right direction. Business is starting to see the value of purpose and infinite mindedness.

I'm cynical about the messengers because they are terrible representatives of purpose-driven organizations. Jamie Dimon, the CEO of JPMorgan, talks about giving back to communities. But a CSR program is not what makes a company purpose-driven. A few years ago, Citibank announced record high layoffs. The same year, it had record high average bonuses. How does that happen? They had the CEO of Johnson & Johnson on the letter. His company was just fined over $500 million for their role in the opioid crisis.

I do believe people can have conversions. But I want to know what happened with these CEOs. Because last year they were all about shareholder value, this year they're not. Are they saying it because they truly believe in it? Or are they saying it because public pressure dictates it? I want to know what steps they're taking to run their businesses differently.

You also talk about the danger of short term bias, but many businesses revolve around metrics like quarterly reporting cycles and stock moves. How should we take these in without losing sight of the infinite game?

There's nothing wrong with traditional metrics and I think they're valuable ways of measuring success over the long run. The problem is not with the metrics we have, it's the metrics we don't have. We need metrics that revolve around trust, character, and honesty. We have an unbalanced picture of the health of our organizations and our teams.

What are other good resources, outside your new book and Carse's work, to learn about the infinite mindset?

I'm a big fan of Viktor Frankl's Man's Search for Meaning. I think that's essential reading for anybody in the workplace.

There's a couple documentaries I really like. Senna, which is about a race car driver. It's got two archetypes—Ayrton Senna, who does it for the for the passion, and his archrival Alain Prost, whose nickname is "the Professor" because he calculates everything. You see the loyalty and love people have for Senna because of his love of the game, as opposed to just the win. The other, Kumaré, is about a guy who sets out to make a documentary mocking the guru culture. Something happens in the course of his making it that is very interesting—but no spoilers.