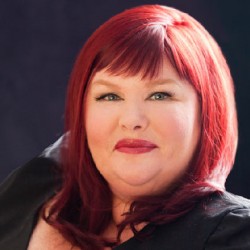 Cassandra Clare is the #1 New York Times and USA TODAY bestselling author of The Mortal Instruments, The Infernal Devices and The Dark Artifices series. She is the co-author of The Bane Chronicles with Sarah Rees Brennan and Maureen Johnson and Tales from the Shadowhunter Academy with Sarah Rees Brennan, Maureen Johnson, and Robin Wasserman, as well as The Shadowhunter’s Codex, which she co-wrote with her husband, Joshua Lewis.

Her books have more than 50 million copies in print worldwide and have been translated into more than thirty-five languages, a feature film, and a TV show, Shadowhunters. Cassandra lives in western Massachusetts. Visit her at CassandraClare.com. Learn more about the world of the Shadowhunters at Shadowhunters.com.

Cassandra Jean is an illustrator and comic artist who spends her days toiling with a pen in her hand and her faithful dog sleeping at her feet. The radio is always on, and Gatorade is a constant source of power!

To say we’re massive fans of The Mortal Instruments and The Infernal Devices would be an understatement, so we are completely thrilled to share The Fandom. net‘s exclusive interview with the creator herself, Cassandra Clare!

Cassandra was lovely enough to answer a few questions for us despite her extremely busy schedule and we cannot possibly thank her enough! Enjoy!

1. You’re a very prolific writer and yet you still manage to communicate with fans often and have a social life outside your work, which we love! What’s your secret to staying sane?

When you’re your own boss, you have to set your own hours. I set very specific hours in which I do work. If I get work done early, I can do some interacting with fans online, or see my friends. If I don’t get that work done, you may not see much of me!

2. What draws you supernatural elements in your writing? Could you ever see yourself writing about normal people with no supernatural powers?

I am drawn to writing books about magic and the supernatural because those are the types of books I like to read. I’ve written many short stories with realistic settings, and I certainly wouldn’t rule out realistic novels in the future!

3. Are any of the characters in The Mortal Instruments or The Infernal Devices based off yourself or someone you know?

Sometimes minor characters are based on people I know — Simon’s friends Eric, Kirk and Matt are all friends of mine. But I’m not writing a thinly veiled version of my own life. These characters are created to fit the needs of the story and to be very much themselves. Sometimes they incorporate aspects of people I know, or have met, like Simon’s sense of humor or Clary’s artistry. Jace, alas, is definitely not based on anyone real.

4. Was there ever a character you planned to kill in a previous book, but couldn’t being yourself to do it?

I intended to kill Max in City of Ashes but wound up putting off his death until City of Glass.

5. Sebastian/Jonathan is a really twisted character, so how do you feel about the fans who find him irresistibly sexy?

There is nothing unusual about it. There have always been readers throughout history who have been drawn to villains. I do not believe that even the readers who find Jonathan/Sebastian sexy are unaware that he is twisted and sick, because I trust my readers to tell the difference between reality and fiction. In fiction, the actions of a villain, even when unspeakable, can be cathartic to read about. They let us experience darkness, but add a safe remove.

6. Did you do more or less “fan therapy” for City of Lost Souls than you did after the release of Clockwork Prince?

I find myself doing a little less, because too much of the therapy would be based on spoilers I can’t give out!

7. Do you have any characters that you feel are often misunderstood by readers? How so?

Clary gets a lot of stick for being headstrong and making rash decisions. I gave her a lot of the characteristics and actions that would normally be given to a boy in this kind of book, and I think it can be a little disconcerting.

8. Did you ever suspect that small conversations in the books like Will’s loathing for ducks in Clockwork Angel would ever spark massive interest among fans?

No, I was completely surprised. You never know what will spark people’s interest!

9. When the City of Bones movie is all said and done, how do you think you’ll react to seeing it for the first time?

Well, they haven’t started filming yet, so I spend all of my mental energy hoping the project moves forward and doesn’t get cancelled. I haven’t even begun to think about what it would be like to see the finished product!

10. Lastly, would you mind telling us a bit about your future projects, The Dark Artifices and The Iron Trial?

The Dark Artifices is a companion series to TMI, I don’t want to call it a sequel because it features different characters. It focuses on the adventures of the Blackthorn family, which runs the Los Angeles Institute, and Emma Carstairs, whose name may be familiar to those who’ve read the Infernal Devices. The Iron Trial is a middle grade series of 5 books that I’m co-writing with Holly Black. The details are super secret right now but I’m really excited about it!