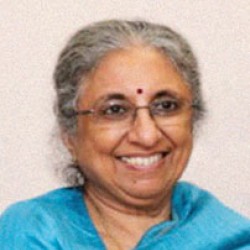 Prabha Sridevan began practicing law in 1983, and from 2000 to 2010, she was Judge of the Madras High Court. From 2011 to 2013, she was Chairman of the Intellectual Property Appellate Board. Now retired, Prabha Sridevan writes columns both in Tamil and English. She is a translator of fiction from Tamil to English.

Seeing in the Dark and Echoes of the Veena are her translations of Chudamani’s short stories. The latter won the VOW award for the best translation (2019). She has translated other writers, like Seeta Ravi, Imayam, Meeran, Ravikumar, and S. Ramakrishnan. Wisdom and Grace is her translation of the lectures of the Sage of Kanchi.