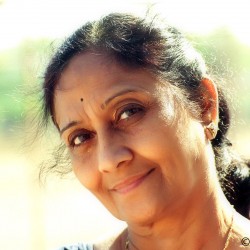 She was born in 1940 to Gujarati novelist Gunvantrai Acharya. She did her B.A. in Gujarati and Sanskrit from Mumbai University in 1960. Later she did her M.A. in Sociology in 1962. She studied drama at National School of Drama, Delhi. She has produced an award-winning television film on leprosy (Ansaar).

Varsha Adalja started her literary career as an editor of Sudha, a women's weekly from 1973–1976, and later with Gujarati Femina, another women's magazine from 1989–90. She hold an executive office with Gujarati Sahitya Parishad since 1978. She has explored lepers’ colonies, prison life and has worked among adivasis.