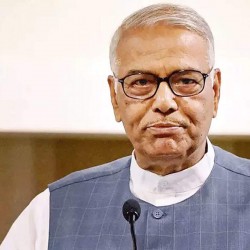 Yashwant Sinha is a veteran politician and a former administrator. He is credited with preparing the blueprint for the 1991 economic reforms of India as part of the Union Budget.

Sinha taught political science at the University of Patna till 1960 before he joined the Indian Administrative Services.

In 1984, he resigned from the services and joined politics as a member of the Janata Party. He worked as the Minister of Finance from November 1990 to June 1991 in Chandra Shekhar's cabinet.