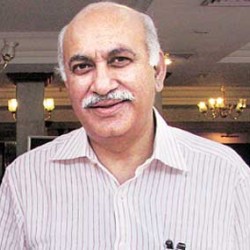 Mobashar Jawed "M.J." Akbar (born 11 January 1951) is a leading Indian journalist and author. He was the Editorial Director of India Today, India's leading weekly English news magazine published by the Living Media group till his resignation in October 2012. He also had an additional responsibility of overseeing the media conglomerate's English news channel, Headlines Today.

He launched "The Sunday Guardian", a weekly newspaper in 2010, and continues to serve as Editor-in-Chief. He is also the founder and former editor-in-chief and managing director of The Asian Age, a daily multi-edition Indian newspaper with a global perspective.

He has written several non-fiction books, including Byline (New Delhi: Chronicle Books, 2003), a biography of Jawaharlal Nehru titled Nehru: The Making of India, a book on Kashmir titled Kashmir: Behind the Vale, Riot After Riot and India: The Siege Within. He also authored The Shade of Swords, a cohesive history of jihad. Akbar's recent published book is Blood Brothers, a skillfully crafted family saga covering three generations and packed with information of events in India and the world, particularly the changing Hindu-Muslim relations.

His book Blood Brothers has been translated into Italian as Fratelli di Sangue. It was released in Rome at the headquarters of Adnkronos on 15 January 2008.

He published his latest book "Tinderbox: The past and future of Pakistan" in January 2012 discussing the themes of identity crisis and class struggles in Pakistan.

Akbar was also the editor-in-chief of The Deccan Chronicle, a Hyderabad-based news daily.