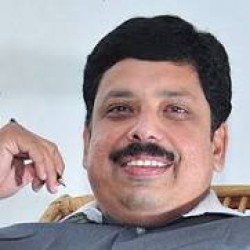 Anand Neelakantan is an Indian author, columnist, screenwriter, television personality and motivational speaker. He has authored six fiction books in English and one in Malayalam. His debut work Asura, The Tale of the Vanquished is based on the Indian epics of Ramayana. His next book series was Ajaya-Roll of the Dice, Ajaya – Rise of Kali based, the two books on the epic Mahabharata told from Kaurava perspective. Anand's books voice the suppressed party or the defeated party. His fifth book Vanara, the legend of Baali, Sugreeva and Tara also follow the same pattern of voicing the defeated side.

Anand Neelakantan also had signed with the producers of Baahubali, the blockbuster film, for a three-book series based on their film and the series will be a prequel to the film. The first book of this trilogy, Rise of Sivagami, was released in March 2017. Netflix has announced a webseries on the book. His books have been translated to different languages such as Tamil, Hindi, Malayalam, Telugu, Kannada, Marathi, Bengali , Gujarati, Assamese and Indonesian Bahasa. The second book in the series, Chaturanga was released on August 6th 2020

Anand’s Asura is one of the 100 books to be read in a life time as per Amazon.[1] The book has sold more than half a million copies across the years. Three of Anand Neelakantan’s books have been shortlisted for crossword award during the respective years and he is also listed as one among the 100 top celebrities in India in 2015, 2017 by Forbes India. All his books have got critical accreditation from various people across the world.

Anand Neelakantan's fifth book Vanara,[2] the legend of Baali, Sugreeva and Tara is published by Penguin Random House and is a best seller. DAR films and KR movies have announced that they have won the film adoption rights and will be producing a multilingual film on Vanara.

Anand's Malayalam work Pennramayanam has been published by Mathrubhumi books.

Anand also writes a column for New Indian Express on current affairs and his fortnightly column is called "Acute Angle".